The main protagonist in the game, the Crazy Climber's main objective is to scale the side of each of four skyscrapers in the game. He must avoid all dangers to successfully complete his mission; if he succumbs to any danger, he will be knocked off the side of the building and lose one life. The game ends when the player exhausts his supply of lives (usually three, depending on the setting); an extra life will be awarded at 30,000 or 50,000 points, depending on the game settings.

If Crazy Climber succumbs to a danger, he will yell "Oh no!" as a tune plays. If the player has any extra lives remaining, the game will resume at the point where he was knocked off, with the most recent major danger eliminated.

These bald-headed residents of the building, who seem to be annoyed at Crazy Climber's efforts to climb the building, will hurl various objects at the game's hero, in an effort to knock him from the building. These objects include flower pots, buckets of water, and fruit. Flower pots are all that appear early on, but the larger objects are used by more aggressive (and numerous) Mad Doctors later on. If enough objects hit Crazy Climber's head (or if he is positioned just right), he will be knocked off the building.

A giant Condor flies across the width of the building, dropping eggs and excrement aimed at the climber. In the early stages, only two of the droppings come at a time, but this increases to eight by the latter stages of the game. As with the objects dropped by the Antagonists, if the Climber is hit by too many droppings in succession, he dies. 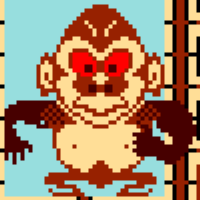 First seen in the game's second stage, these falling steel girders and iron dumbells serve to try to knock Crazy Climber from the building upon contact. At first they fall fairly straight down, while at later levels, they tend to fall diagonally through the air, making them much bigger threats. You can survive their impact by holding both hands down, but only during the first wave of each building.

Protruding from electric signs that appear in the upper levels of the later skyscrapers, Crazy Climber can withstand 10 shocks without danger. The 11th shock, however, is fatal. Move past the sign as quickly as you possibly can.

First appearing in the third level, Crazy Climber must avoid these signs at all costs, as they will knock him off the building upon contact. They are large and difficult to avoid up close, so move to a safe location on the building immediately upon sighting them. They do not move laterally.

Appearing at the third and fourth buildings, this red balloon can net the player bonus points if he is able to get Crazy Climber to grab it. In addition, Crazy Climber is transported up 10 stories to a safe window. However, the player has only a limited amount of time to grab the balloon, before it drifts away.

Awaiting Crazy Climber at the top of the skyscraper is a helicopter, which makes several passes at various points along the roof. If the player is able to get Crazy Climber to touch the runner, he will receive a bonus (determined by the building stage and how much "time" was used to scale said building), a victory tune will play, and the game will progress to the next round, where a more challenging skyscraper awaits.

If Crazy Climber does not grab the runner, the game still moves on to the next building; however, no bonus points are awarded.

Each building has a STEP POINT heading. This indicates how many points you get for each window you successfully climb to. You also start out with a certain amount of bonus points per building. On buildings one and two, they decrease by 100 for every 2 seconds, while on buildings three and four they decrease by 200 points for every 2 seconds. Below are listed the STEP POINT and BONUS RATE points :

The balloon shows up during buildings two and three. You don't necessarily get points for grabbing the balloon. Instead, Crazy Climber will get lifted up ten stories while avoiding any dangers that they may or may not contain. You will also get STEP POINTS for these bypassed stories as if you had actually climbed them. In addition, it will give the player a bigger bonus since it is quicker going up the building like this.