Crazy Kong (クレイジーコング, Crazy Kong?) is not a bootleg of Donkey Kong. Falcon did have a license from Nintendo, but it was not for the United States. Crazy Kong was supposed to be for sale outside the U.S. (South America, Europe, etc.), but the lag in production of arcade DK's by Nintendo for a 3 month period during 1981-82 made demand for any DK type game go through the roof. At this time, Nintendo of America was moving from NY-NJ to Redmond WA and there was a 4 month backlog on orders. This opened the door for the illegal Crazy Kongs to fill the demand. Approximately 20,000 Crazy Kong were distributed illegally in the U.S.

There are two versions of the original: Crazy Kong and Crazy Kong Part II; the differences of which are in minor cinematic artifacts and bugs, color palette choices and minor gameplay differences. Crazy Kong Part I shows no copyright or company name on the title screen. Crazy Kong (parts I and II) runs on modified Crazy Climber hardware. In addition there are other versions of the game that run on Scramble, Jeutel, Orca, and Alca hardware. The official versions of game came in two different stand up cabinets that featured a large and angry, rather than comic, ape embedded in the artwork. The cabinets were created by Zaccaria. 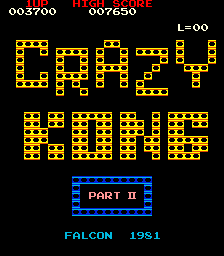 The main difference between Crazy Kong and Donkey Kong is the sound, and color capabilities. Crazy Kong ran on hardware that had the same processor as Donkey Kong, but with weaker video capabilities, and a totally different sound chip. Essentially, Crazy Kong had terrible sound, and some color oddities. The background music is missing entirely, and most of the sound effects have been changed. For example, in Crazy Kong, Mario makes a 'Hiya!' sound when he jumps, instead of the 'Boing!' that he makes in Donkey Kong. The graphics use slightly different colors, which change from level to level. The Kong animations are also different, and often do not match up with the in game action. There are also minor changes to the gameplay. Kong doesn't toss out nearly as many barrels, and there are other small changes such as gaps in platforms that were not in the original. The manner in which the elevators work has changed as well.

Below is a screenshot comparison of every level, including the ending cinematic. In addition to some of the changes between Part I and Part II, Stage 1 and Stage 3 have minor cosmetic alterations found only on Level 2 and beyond, that are not present in Level 1.