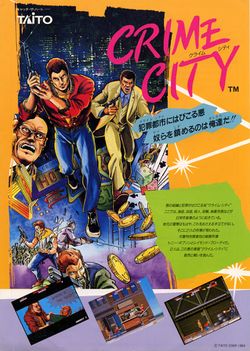 Crime City is a run and gun arcade game, that was released by Taito Corporation, in 1989; it runs on that company's B-System hardware, and it is a spin-off from Chase H.Q., which had been released in the previous year. The players must use two 8-way joysticks, to take control of undercover policemen Tony Gibson and Raymond Broady (who are now fighting against criminals on foot!), with two buttons to make them fire shots at the various enemies and jump - and they shall start each of the game's six rounds (which all focus on a specific crime) armed with a pistol but can collect extra weapons as they progress through it. However, all weapons only have a limited amount of ammunition, and if the cops should ever run out, they will only be able to kill the enemies by punching or somersaulting into them.

An official sequel to Chase H.Q., S.C.I. - Special Criminal Investigation, got released later on in 1989; the series also later begat a second, Japan-exclusive spin-off game (which was a quiz game, entitled Quiz H.Q.) in 1990, and as with the company's own Quiz Torimonochō (which was released earlier in 1990), knowledge of the three Japanese writing systems is essential for all who wish to succeed in it.