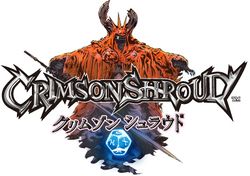 Crimson Shroud is a tabletop RPG for the Nintendo 3DS. It was originally released in the Guild01 compilation in Japan and later released separately on the Nintendo eShop. It was designed by Yasumi Matsuno and features illustrations by Hideo Minaba and music by Hitoshi Sakimoto.

Guild02: Attack of the Friday Monsters! A Tokyo Tale · Bugs vs. Tanks · The Starship Damrey