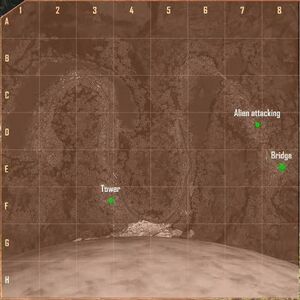 Find and recover the container.

Keep track of the train[edit]

Keep track of the train the container can be evacuated.

You're on a moving train, and soon you're going to be on a moving train in the open. Activate your speed boost and rush down the train, taking care of any KPA you see. Make sure you do this before you get outside, or things will get harder.

Don't use any cloaking here; you're moving, and as such your cloak drains quickly. While you can man a mounted machine gun and rip into targets around you, there's a much easier way to do things: find the container (at the head of the train), and jump in the gap between it and the engine car. Since the window of opportunity to see, aim at, and shoot you is so small, You’ll pretty much be safe from everything except any vehicles that happen to pull upright beside you. But then you can just shoot them like the jerks they are.

From here you just ride the train until O'Neill contacts you. Then jump off the train when it stops.

Get to the station's control tower and the train ready for extraction.

O'Neill will cover you here. Rush towards the control tower (though don't worry about taking too long). You want to make a beeline for the air-control-looking tower, with white paint. Head to it (there's a soft-top along the way), and make sure a path is cleared between it and the train. If you want a grenade launcher, there's one in one of the houses near the tower, as well as an assortment of other fine weaponry.

As you get to the top of the tower, the train will begin to move. Rush to it as quickly as you can, and jump back on.

Keep track of the train[edit]

The train is moving again. Keep track of it until the container can be evacuated.

Stay in the same place as before, follow the same routine: wait, shoot back at whatever is shooting at you, get off when the train stops. O'Neill will warn you of any real problems ahead. The worst you'll have to deal with will be a helicopter, but chances are it won't be able to shoot at you before you head through a tunnel. Eventually you'll enter the swamps, and the KPA won't be the only problem you'll be facing.

Defend yourself and keep the container from the exosuits.

It's just like the objective says. Get ready for a lot of aliens, hoppers and fliers, to assault your position. First there'll be a wave of about six hoppers, one of which is a shield generator. Take out most of those, and Emerson will warn you of another wave, this time with fliers. There're some Scar rifles and rocket launchers near a bit of debris on the eastern side of the train. This also provides some decent cover, but remember to keep moving, at least circling around the wreckage while you fire at the aliens. That'll be the last of them.

The train is moving again. Keep track of the train until it reaches the bridge.

Get back on the train. There are no enemies to fight this time, so grab a high perch and watch the scenery go by, at least until you reach the bridge.