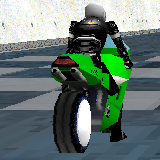 If one player is playing the game alone, then his position in the race shall never change from 1/1 regardless of how many of these green CPU-controlled bikes he passes; however, if two, three or four players are playing, and any of them are ahead of him in the race at any time, his position will be 2/2, 3/3 or 4/4. As mentioned above, they are also based on the CPU-controlled bikes from the two Suzuka 8 Hours games, but polygonal and in 32768 colours.