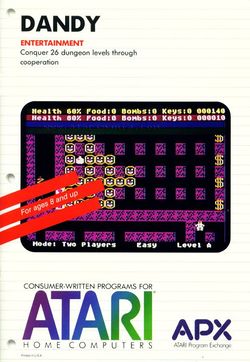 Dandy (later Dandy Dungeon) is a dungeon crawl computer game for the Atari 8-bit computers. Dandy was one of the first games to offer four-player cooperative play and a built-in editor. It later allegedly served as the inspiration for the popular Atari Gauntlet series.

Dandy took place in a dungeon consisting of a series of 2D mazes drawn in a top-down fashion. The dungeon as a whole had multiple maze levels, connected together using stairwells. Portions of the mazes were also blocked off by locked doors, which could be opened by finding the keys scattered through the maze. The basic goal of the game was to fight through the maze to the next stairwell, from there to the next level, and proceed through the dungeon's levels to the end.

The players were armed with a sort of bow and arrow, which could be shot in any of the eight cardinal directions. Monsters came in several varieties, although the difference was strictly graphical. When hit, the monsters would "devolve" to the next less-powerful state, before eventually being killed and disappearing. Some monsters were placed in the maze during its pre-game creation and appeared as soon as that level was entered, while others were produced in "monster generators", skull-shaped objects placed in various locations.

Monsters touching the player would reduce the player's health, which could be improved by eating food. Food was scattered around the dungeon and was picked up on the way. Potions were also available, which would destroy every monster on the screen when activated. Potions could be either shot with the arrow, or picked up and carried for later use. A special "heart of gold" could also be collected, and used to revive dead party members.

The game included a level editor that enabled ambitious players to design new dungeons and exchange them with other players.

What became Dandy was originally written in the fall of 1982 as Thesis of Terror, Jack Palevich's MIT bachelor's thesis. The original concept was for a five-person game, four players on Atari computers acting as graphical terminals, and a fifth machine acting as dungeon master controlling the action from a separate computer. The two machines would communicate over their serial ports. However, time constraints meant that the interactive dungeon master role was never implemented. The separate machine, a Hewlett-Packard Pascal Workstation (a member of the HP 9000 family), was used solely as a file server, sending new maps to the Atari on demand.

Thesis of Terror's gameplay was designed with help from Joel Gluck, who was a freshman at MIT at the time. Gluck designed several of the levels in the game, and invented some of the common idioms of Dandy-style games. For example, he designed the "funnel trap", where treasure was placed in such a way that the players would run to the treasure, causing a wall of monsters placed just off screen to activate and charge on the party.

Several changes were made to the gameplay as a result of playtesting. Early versions of the game allowed players to shoot each other, but this was removed after testing showed that when the players discovered that they could hurt each other, the game quickly degenerated into a chaotic free-for-all. Another change was that dead players originally had to sit out the rest of the game. Testing revealed that parties would start the game over when one member died, so that the whole party could continue to play together. To keep the game going, the revival heart was added.

After graduating from MIT, Palevich went to work for Atari in the Atari Research division. While working at Atari, Palevich continued developing the game. During the period from February to May 1983 the original was cleaned up for release, and it was during this period that the name became Dandy. The workstation was removed, and the dungeon master's role was reduced to laying out the maps and saving them to floppy disk. Another change was to remove the ability to return to higher levels of the dungeon. This change was made after play-testing revealed that nobody ever went up to previous levels, except by mistake. Removing this feature sped up level changes.

Two years after Dandy's release, Atari arcade division programmer Ed Logg and his team wrote Gauntlet. During a speech given at the 2012 Game Developers Conference, Ed Logg said that Dandy served as direct inspiration for Gauntlet.

Palevich later sold the rights to Dandy to a British game developer, Electric Dreams Software, who released versions for the ZX Spectrum, Commodore 64 and Amstrad CPC in 1986. They chose to make a Gauntlet clone, rather than a Dandy clone, and as a result, the British developer was later sued by Atari.

When Atari decided to re-enter the game console business in the late 1980s, they made a new Dandy-like game known as Dark Chambers. The manual states "Copyright 1983 John Howard Palevich. All rights reserved." Dark Chambers was released for the Atari 2600, Atari 7800 and Atari XE computers in 1988. This version supported only two players as the additional joystick ports had been removed from the 8-bit machines some time earlier.