Begin by examining the writing on the wall. It reads "bloodlust," and it appears to be written using the victim's blood. This is the signature of serial killer Genocide Jack, which could mean one of two things: Genocide Jack is among the students, or a copycat killer is in their midst. Examine the murder weapon, the dumbbell stained with blood, for the Locker Room Dumbbell Truth Bullet. Examine the poster, also stained by blood, that seem to confirm that the murder took place in the locker room. Examine the carpet to find similar bloodstains, and finally, the body. For Sakura's Account, speak to her. She tells Makoto of Chihiro's desire to become stronger, which she and Aoi responded to by inviting her to work out with them. However, she mysteriously declined. For Mondo's Account, speak to Mondo, who also describes Chihiro's quest for strength.

Exit and examine the card reader by the locker room. Monokuma mentioned that girls and boys can only enter their corresponding locker rooms, which seems to indicate that Chihiro was murdered by a female student. This earns you the Card Reader Truth Bullet. However, Byakuya has another thought in mind. 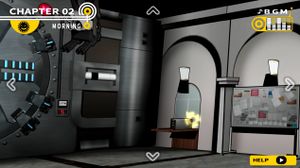 Examine the small filing cabinet on the table to the right. Inside are e-Handbooks, three in total. Upon turning one on, Makoto finds that it belonged to Sayaka, and Byakuya confirms that another is Junko's. The third handbook is broken, though because of the violent circumstances of his execution, Byakuya and Makoto rationalize that it must have been Leon's; Monokuma denies this theory by informing them of the handbooks' indestructibility with only one weak point that he refuses to reveal. The broken handbook remains a mystery, but nevertheless, the working handbooks would indicate that the murderer could have been a man using a deceased girl's handbook, earning you both the Main Hall e-Handbook and Broken e-Handbook Bullets. 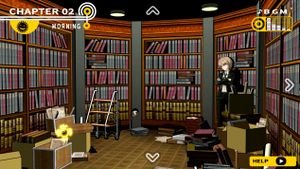 Examine the door in the library to enter the archive. Examine the desk lamp on the floor, which Makoto recalls being used by Byakuya. Examine the wooden box to the left. Apparently, there was an extension cord inside. When discussion moves to the files, react when Byakuya mentions that he's [reviewed them multiple times]. He brings forward a case file detailing the murders of Genocide Jack, with an MO that matches Chihiro's murder. To make matters more suspicious, Byakuya brings up that only the police investigating the case and higher-ups are aware of the fact that Genocide Jack suspends victims in midair after killing them. Speak to Byakuya for the Genocide Jack Case File Bullet.

Return to the pool and speak to Hifumi. Apparently Celeste has something to say, but for now, continue to the boys locker room. Examine the poster on the wall, then the stain on the carpet for the Boys Locker Room Carpet Bullet. Return to the girls locker room and speak to Kyoko, who reveals Chihiro's e-Handbook is missing. After obtaining the Truth Bullet Chihiro's e-Handbook, do as instructed by Kyoko and examine the body again. As it turns out, the rope used to suspend her is actually a cord. The blow to the head also seems out of place, especially after perusing the Genocide Jack file, earning you the Status of the Dead Body Bullet. Examine the poster here for Makoto to realize the odd placement of the Two Locker Room Posters; the boy band would appeal more to girls yet it's in the boys locker room, and vice versa. The posters appear to have been switched, but why? Speak to Sakura and she'll mention another oddity: a Disappearing Stain. Apparently, she spilled coffee on the girls locker room carpet, but the stain is now nowhere to be found.

In the library, examine the desk lamp. It won't turn on because its cord can't reach the outlet, but Makoto remembers seeing it on. Where could the extension cord be? For this, you obtain the Library Desk Lamp Truth Bullet. Then examine the bookcase to the right to find out the Genocide Jack case files have gone.

Speak to Celeste in the warehouse for her account. She recalls seeing Chihiro attempt to hide a track jacket by stuffing it into a duffel bag the night of the murder, as if she was on her way to exercise in secret. However, the tracksuit and duffel bag were nowhere to be found at the crime scene. Nevertheless, you obtain Celeste's Account as a Truth Bullet.

Lastly, speak to Aoi in the dining hall. She mentions that Chihiro would spend more time with the guys than the girls. Why was Chihiro so shy around girls? This information is relevant enough to earn you the Truth Bullet Aoi's Account.

With that, the investigation comes to an end. Just as before, head through the big red doors in the first floor's hall and take the elevator to the courtroom.