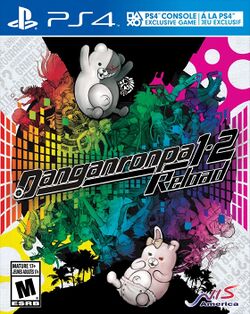 An international release for Windows, Mac OS, and Linux titled Danganronpa 1 + 2 was released on June 6, 2016 via Steam, though this release lacked a new set of achievements for both games in the compilation, with each instead preserving their individual achievement sets.

Features new to the Japanese release that would later be carried over into the individual international releases of the games were School Mode in the first game and Island Mode in the second game. The new set of trophies released with this version of the game features a combination of both Trigger Happy Havoc's and Goodbye Despair's trophy sets, reduced to accommodate the inclusion of both games. Some trophies have also been altered in value and conditions of fulfillment.

There are 45 trophies for Danganronpa 1-2 Reload on the PlayStation Vita and PlayStation 4.