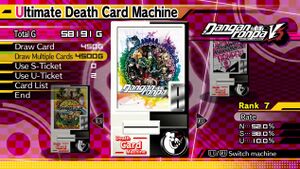 The main screen for this mode, featuring different machines for each game in the Danganronpa trilogy.

Ultimate Death Card Machine (カードデスマシーン, Kādo Desu Mashīn?) is a gacha game within Danganronpa V3: Killing Harmony, unlocked after the main game has been completed. Currency received from Despair Dungeon: Monokuma's Test, in the form of G, can be used to dispense cards of varying rarity (with N being common, S being rare, and U being very rare) from one of three machines (representing each game in the Danganronpa trilogy). The cards received from this mode can be leveled up in Ultimate Talent Development Plan, giving them stat boosts. Those leveled up cards can then be used in Despair Dungeon to proceed further, and the further into Despair Dungeon the party travels, the higher the chance the Ultimate Death Card Machine will dispense a rare card. However, the cost of using the Death Card Machine will also increase to balance out the improved rate. The attributes that can be boosted for each card are as follows: 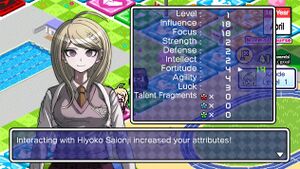 Character cards are also separated by type. Types reflect the character's personality and impact the direction of their stat growth. The three types of cards that can be collected are as follows:

Below is a list of cards that can be collected, split by their game of origin, including their minimum and maximum stats and types.