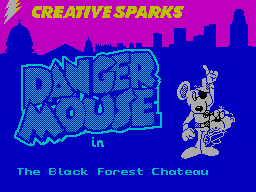 You will first have to connect the Sinclair ZX Spectrum, Commodore 64 or MSX to the television and cassette recorder, then switch all three of them on; on the cassette of Creative Sparks's 1984 text adventure game Danger Mouse in the Black Forest Chateau, there are two programs (Part 1 and Part 2), and you will have to begin by placing Side 1 of it into the cassette recorder and rewind it to the beginning (unless it is your first time playing it), then type LOAD "" on the console keyboard (without leaving a space between the quotation marks) and press Enter. You will then have to press "PLAY" on the cassette recorder to make the program load into the console - and if you manage to reach the end of Part 1, you will be given the secret code for Part 2 (for which you will have to stop the cassette, then remove it from the recorder, turn it around to Side 2, place it back into the recorder, and load it again). The solution of the game was printed in Your Sinclair magazine from February to July 1989, but another one was also printed in it from December 1990 to March 1991; this guide will display the correct answers on the lists of DM's choices in bold text, so it will be easier to remember which ones they are.