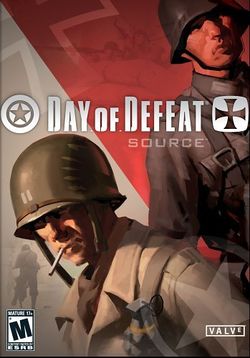 Day of Defeat: Source is a revamped version of the original Day of Defeat using the more powerful Source Engine. The Windows version was first released on Steam on September 26, 2005 and then sold at retailers shortly after. A Mac OS version was released on July 12, 2010.

The game focuses on team-based gameplay with two different gametypes, using scenarios based on World War II battles; the player must also choose between six different classes, all of them unique and offering different gameplay experiences: the Rifleman, Assault, Support, Sniper, Machine Gunner, or Rocket class. Some maps are based on classic maps found in the original Day of Defeat, but there are some new maps created by Valve Software, most of which use HDR (high dynamic range rendering).