Flash was one of the 4 original maps released by Valve with the game. Its combat is very linear, as rather than providing alternate routes across the map like usually, both teams are forced through one central choke point in the middle of the map. Due to this a lot of players do not like this map, as classes such as snipers have a hard time.

The points in Flash are very small and captured very quickly, requiring the player to simply run over the flag. Due to this the lead often switches between two equally matched teams. The first points of each team are just ahead of the spawn points, and are usually only captured by a sprinting and dodging assault or support player when the other team have been pushed back to around the point. The second points both lie in open areas to the side of the main area of combat, and usually provoke slightly different tactics to the rest of the map. The central point lies in the choke area that both teams have to pass through to get across the map. Often players that try to camp around here will be quickly killed, and the area is not usually controlled by one team for long. Often a lot of grenades are thrown at the opposition's end of the area, so players must be particularly aware of where thrown grenades have landed 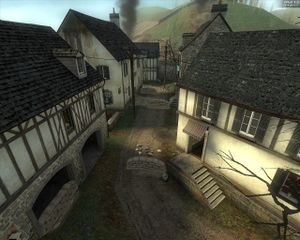 The US view of Main Street

The US should start by setting some MGs to guard their second point, which can be moved up if there is little chance of an opposing player reaching the point. Snipers should not hug the back wall facing Main Street, as they are likely to be killed by grenades thrown into the area. Instead they should either move slightly further forward, or seek short term cover in one of the two buildings on the US side of the street, taking out any MGs, snipers or other camping players. Any player with grenades would be well advised the throw/fire them at the Wehrmacht side of the street, while assault players smoke the centre point. When the point is smoked, and there are no MGs spamming it, assault and support players should make a dash for the centre point, and then progress right to the second point if in a group of 3 or more, or camp in the building to the left if alone or with a single partner. From this point MGs can move up and cover Main Street, Snipers try to find a suitable camping spot further up the map (see below), and the assault team can push the opposing team back, with MGs and snipers following behind as suitable places become available.

If the US find themselves in a position where the Wehrmacht have control of Main Street, and are being pushed back, they should try their best the hold their remaining two points with MGs and Snipers, while the assault team should try to push the opposition back to main street through the use of smoke screens and constant use of grenades. 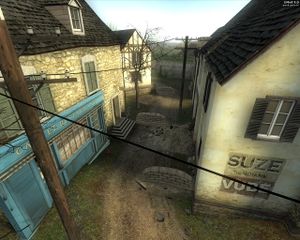 The Wehrmacht view of Main Street

The Wehrmacht should follow a similar tactic as outlined above for the US, however the Germans have more routes to attack main street from, and a more suitable house to sniper from and set up an MG in facing main street as it is more protected from grenades. Again the Germans should try to smoke main street, with MGs and snipers covering the assault. Riflemen should follow the main route across main street, or go with support gunners for a flank attack via. the second point. Assault players should go through the house on their right as they approach main street, enabling them to flank it from the right. All players with grenades are advised the send them down to the US side of main street, or into houses where US players are attempting to camp.

Once main street has been taken, the assault should send single players to clear out the house on the left, providing covering fire for them as the route into the house involves coming under fire from the main US route. MGs should then push up and cover main street, while snipers can go with the assault to the second US point as there are some good camping spots. Again the team should try and slowly push the other team back, until you are close enough to rush the last point.

If you find yourselves being pushed back, try to regain control of main street by the use of smoke, explosive grenades and a constant barrage of fire while being covered by MGs and snipers. 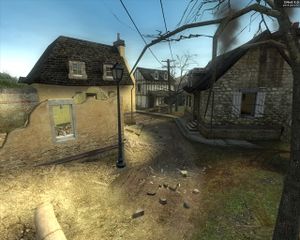 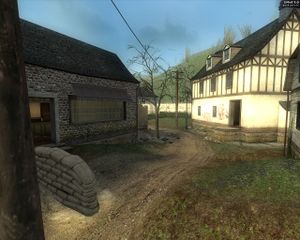 Approaching the US 1st point from Main Street
Retrieved from "https://strategywiki.org/w/index.php?title=Day_of_Defeat:_Source/dod_flash&oldid=892490"
Hidden category: