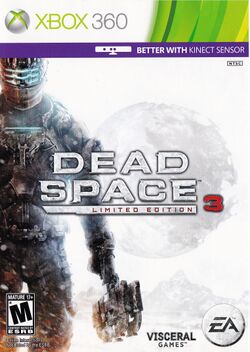 Dead Space 3 is a 2013 science fiction third-person shooter video game developed by Visceral Games and published by Electronic Arts. Announced at E3 2012 and released internationally in February 2013, it is the sequel to Dead Space 2 and the third main entry in the Dead Space series.

Primarily set on the frozen planet of Tau Volantis, the game follows protagonists Isaac Clarke and John Carver as they attempt to end the Necromorph threat once and for all.