You control Prince Myer throughout his adventure to defeat the evil Rubas and rescue the kingdom. In order to do this, you will have to collect and destroy the seven bells that were used to summon evil into the realm. Each bell is kept high atop a tower above the castle, and is guarded by fierce monsters. Prince Myer stars off humbly with little to no protection. He begins the game with 100 life points, but can ultimately increase that number to 299 if he finds and collects enough large hearts. He also begins the game with no money, and can hold no more than 250 Ludders at a time. He will need to spend that money wisely in the beginning so as to purchase armor and increase his chances for survival. Prince Myer will die if his life points are ever reduced to 0, or if he has the misfortune of stepping off the edge of a cliff and falling to his death. Make sure that neither fate befalls him.

The kingdom is broken up into several different sections. 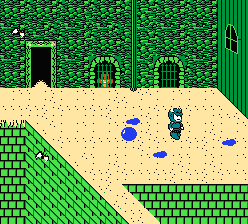 The castle is the lowest region of the kingdom geographically, and it is the location from which Prince Myer begins his journey. There are 9 "layers" to the castle, each of which has doors connecting one layer to the next. In each layer, an entrance is hidden. Most lead to a dungeon, while two lead to shops. However, once the bells are burned, even the shop entrances will become dungeons. 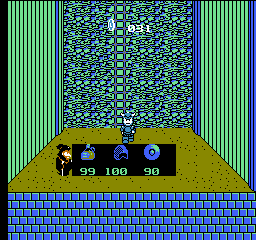 Most shops are located in dungeons. However, two can be accessed directly from the castle before all of the bells are burned. There are seven different types of shops, and the wares they sell change after you have collected your third bell, as well as when you have collect the fifth. The quality of the items may improve, but the prices surely do not. 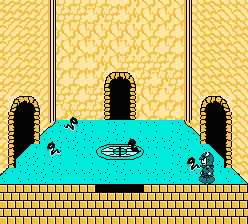 There are, in fact, 10 different labyrinths hidden throughout the castle and the cliff wall. They make up a vast majority of the game… and over 90% may be completely ignored. The only purpose dungeons serve is for shopping early on in the game, small restocks in the middle, and to get you utterly and completely lost. The dungeons in this game can have close to 250 different rooms, and the exit is never found where you begin. As a result, it is wise to avoid these completely, save for just one that you should get to know very well, and only utilize when it becomes necessary. 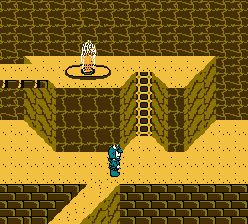 The cliff wall occupies the layer above the ninth and highest layer of the castle. It is twice the length of any one castle layer, and it contains the entrances to all seven of the paths that lead to the towers in the game. It is also the home of the holy flame, an eternal fire that is the only thing capable of destroying the bells. You must ultimately burn every bell in this very fire. 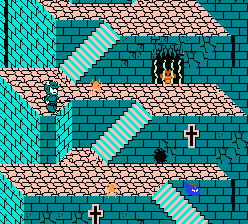 Before you can climb a tower, you must first climb the mountainous path that stretches from the cliff wall to the tower. Take care to avoid the monsters that attack you there. You may discover parallel worlds, pockets of alternate dimensions where artifacts of great power have been lost and forgotten. 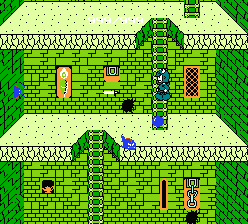 Once you climb the mountain to the tower entrance, you will have to make your way from the bottom of the tower to the very top, in an effort to challenge the powerful monster which guards that tower's bell. In addition to parallel worlds, you may also discover secret rooms hidden off to the side of certain floors, where more artifacts have been hidden. If you defeat the guardian fiend at the top of the tower, you can claim the bell, and burn it in the fire.