The key to strategy is staying alive. You get a new Smart Bomb and a new Ship every 10,000 points. As the game progresses, more aggressive enemies enter the playing area. To stay alive past 30,000 points, you'll need to know how to use each of the controls. The strategies below build on each other. It's essential to know the first strategy before you can move to the next, and so on. Once you get to the second strategy, you're still using what you've learned in the first one. You're simply adding to its depth. Remember: your basic objective is to kill all the Landers on the screen to complete an attack wave. It's necessary to kill them quickly, so that they don't mutate your Humanoids and Baiters don't appear. 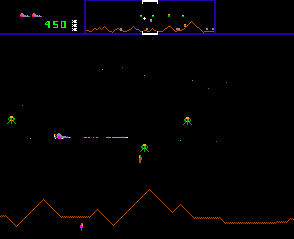 Destroy the Lander, then rescue the Humanoid.

These are certain basic strategies that must be developed and learned as soon as possible. All of these strategies, once learned, will continue throughout your entire game. 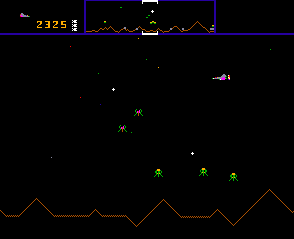 Confuse the Mutants by reversing.

Reverse strategy begins on the second screen. It should be used sparingly, and only when necessary. The most advantageous reverse strategy concerns the Mutants. Mutants are dangerous and difficult to kill. They also track your every move. A good way to kill them is to move up toward a Mutant, reverse and destroy it instantly. Your reversal will confuse the Mutant and stall him for an instant. 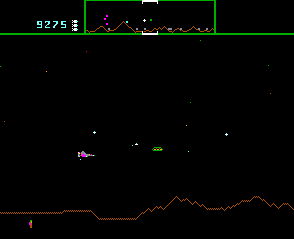 Hyperspace if you are overwhelmed by Baiters.

Hyperspace becomes necessary when the score starts building, at around 30,000 points. If you've dawdled during an attack wave, several Baiters may appear. These Baiters are faster moving and faster shooting than you are. There's no need to waste a valuable Smart Bomb on them. You might as well escape them with Hyperspace. Just beware: you have no idea where you'll end up. Be prepared to move instantly as soon as you've reappeared on the screen. 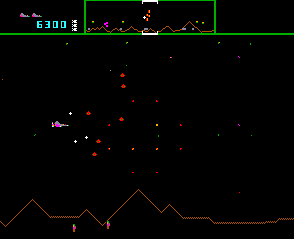 Destroy all of the Swarmers with a Smart Bomb after destroying the pod.

It's important for several reasons to try to break pods and kill swarmers fairly early on. Once they're dead the level becomes calmer and easier to play. In addition, baiters multiply when the number of aliens get down below 4; but swarmers are not counted towards that number and only make the level even harder at the end.

Swarmers can be passed fairly easily; if the player turns around immediately behind them, they will continue in the same direction, and can be shot from behind with impunity, they cannot fire backwards.

Swarmers will also collect along the players firing line if the player positions their ship in the middle of the screen. This also makes them much easier to kill.