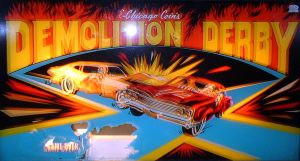 Demolition Derby is an arcade game which was released by Chicago Coin in 1977; it was the last game they ever produced, and is not to be confused with Bally Midway's 1984 arcade game of that same name. Described upon its flyer as "the most unique game ever made", the players must take control of two pursuit cars in (as its naming suggests) a demolition derby - and two CPU-controlled drone cars will always be in the derby. When either player's car hits a CPU-controlled drone one, it shall be destroyed, and you will receive one point; the drone car's wreckage will also remain on the arena as another one comes along to take its place. As the drone car wreckages start to pile up all around the arena the players' mobility will become more limited - and they must drive around them with increased skill and speed if they wish to go on receiving points (until the game timer runs out).