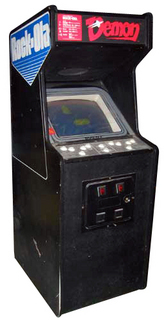 Demon is a multi-directional shooter arcade game that was released by Rock-Ola in 1982; it runs on Cinematronics' vector hardware (a Cinematronics CPU running at 5 MHz, with a Zilog Z80 and three General Instrument AY-3-8910s, running at 3.579545 MHz). The player must take control of a vector human by using two buttons to make him revolve left and right, with three additional buttons to make him fire, walk forward and use a "panic bomb" - and you will receive 10 points for every second your human is alive in this game. You will also gain 100 points and a laser recharge for every "Fire Gem" your human collects, and when you drop them off at the "Cargo Shuttle", you'll receive a bonus that starts out at 100, and increases by 100 each time until it reaches 1000 (at which point you'll receive one extra life); "Drone" ships are worth 100-400 points, while "Fire Balls" are worth 700-1500 points and the eponymous "Demons" are worth 800-1300 points for indirect hits and 1500 points for direct hits. Although the vector display was monochrome, the monitor featured an overlay to give it a blue background and depict the two large blocks (one oriented vertically, the other horizontally) as rocks.