This is the first game in the Deponia series. For other games in the series see the Deponia category. 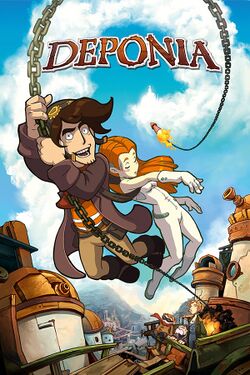 Deponia is an adventure game that was developed and published by Daedalic Entertainment. It was released for Windows in 2012 and has been ported to OS X, Linux, iOS, PlayStation 4, Nintendo Switch, and Xbox One. The game's story sees players taking on the role of Rufus, an inhabitant of the junk planet Deponia, as he attempts to seek a new life on the floating city known as Elysium. However, he soon becomes embroiled with the task of helping an Elysian return to their home and uncovers a plot that threatens his home planet.