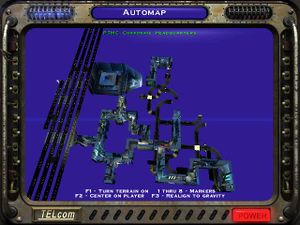 You start the map within the subway, and will need to reach PTMC headquarters. First, grab the afterburner cooler at the end of the current tunnel, and head left.

From here, you have to pass through four different active train tunnels; trains will go through the track in a specific pattern and at a high speed. The saftest way to go through these tunnels is to wait for two trains to pass in rapid succession before attempting to go through the tunnel; while not foolproof, it guaranteed passage through the first three tunnels. Tri-chording will help in this section as well; move forward while strafing up and right at the same time.

The first tunnel requires a left turn, and also provides cubbyholes on either side of the tunnel. The final tunnel doesn't have cubbyholes, but has a long delay after the two trains pass through. With the cooler, you should be able to make it through either two-train movements, but without the cooler, you will have to determine which of the two-train sequences has the longer wait time.

When you reach the surface, you will encounter the standard law enforcement robots that will attack. Head to the sewer by following the right path.

If you explore the area, you may see an impact mortar wedged between two floors of a building; ignore it since it's inaccessible.

The sewer contains a few weaker robots, but they are still a threat.

The easiest means to reach the tower is to release the guidebot. Otherwise, you can follow the left wall.

The PTMC tower is located a short distance from the sewer exit. After opening the door, head into the tower and deploy the data cartridge to inform the president of the PTMC about Dravis.

When you try to leave, PTMC Mercenaries will intercept you.

If you have trouble with the mercenaries, there are a few items that can help you. For example, there is an invulnerability charge located on the left wall of the complex.