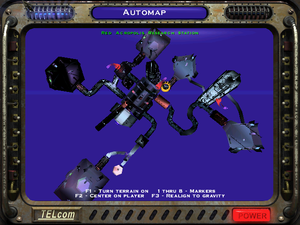 The PTMC is not impressed with your alleged assassination of their corporate president, and has convinced the CED to launch an attack on Red Acropolis. You will need to defend three of the five reactors in Red Acropolis for 12 minutes, then evacuate.

When you fly forward from the start, you will enter the main hub with access to all five reactors, but will be attacked by a napalm stormtrooper. There are a few important items in this area, including the super laser (behind the second pillar) and the full map. The doors to all five reactors will border this room, all being numbered from left to right.

If you have time, fly downward in this room, then down the shaft into a small maintenance room. While there are two robots with homing missiles, you can collect both the plasma cannon and quad lasers in this room (if you do not have them already.) 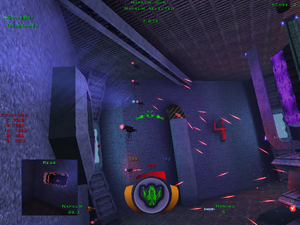 View of enemies attacking the reactor.

The reactors' status is shown on the left side of you view, showing the shield status for each of the five reactors. They will be approached by robots that appear in breach holes, and attacked. Unlike Descent and Descent 2, these reactors are incapable of self-defense.

The first reactor is easily accessible. The second is accessed by a floor door starting in the first room. Reactor 3 is accessible through a vertical tunnel, and also contains an energy recharge station. Reactor 4 is reached by a long winding tunnel, or by a maintenance tunnel from Reactor 3. Reactor five is on a lone path, and is the right-hand branch within this path; the door in the left branch leads to a small room containing gunboys and a rapid fire charge.

The three breaches can be found in the main hub, at the entrance leading to Reactor 2, and in the tunnel between reactors 3 and 4.

Once the twelve minutes have passed, the reactors are set to self-destruct. You will need to escape near the start of the map, by taking the emergancy exit on the top of the main hub.