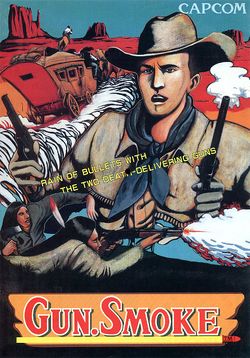 This guide is for the opriginal arcade version. For the NES version, see Gun.Smoke (NES). For the unrelated BBC Micro and Acorn Electron game, see Gunsmoke.

Gun.Smoke is a vertical scrolling shooter arcade game designed by Yoshiki Okamoto, and created by Capcom in 1985. The game, which has an American Western theme, centers around a character named Billy Bob, a bounty hunter who is after vicious criminals of the Wild West. Although sold by Capcom and purchased by Rockstar, the Red Dead video game franchise started out as a spiritual successor to Gun.Smoke.

Gun.Smoke is very similar to Commando, another Capcom game, but with several differences. Whereas Commando is a "run and gun" game, this game is a scrolling shooter in which the screen scrolls upward automatically. Players have three ways to shoot, using three buttons for left, right, and center shooting. However, a player can combine buttons to change the angle at which the guns are fired. Players still die by getting shot or struck by enemies like in Commando, but can improve their chances by getting special items, including a horse, for protection up to three hits; boots, for speed of movement; bullets, for faster shots; and rifles, for shot length. These items are found by shooting barrels.

There are other items that are used for points like stars, bottles, bags, dragonflies, and cows, as well as two other items to watch out for: the yashichi, which grants extra lives, and the cattle skull, which reduces Billy's power. There are obstacles in the game such as streams, buildings, and hills. These obstacles do not cause damage to Billy even if he is caught between the screen and the obstacle (this will, however, kill the horse).

Gun.Smoke was ported to many systems, including the MSX and Commodore 64. In Europe, it was released on the Amstrad CPC and Sinclair ZX Spectrum under the name Desperado. The game was also ported to the Famicom Disk System and NES in 1988, with some alterations. See the NES version guide for more information. The original arcade version was released on several later generation platforms under compilation titles such as Capcom Generation 4 and Capcom Classics Collection.

This town, which was a bustling gold rush area several years ago, is now the target of bandits who kill mercilessly to steal gold dust from the people. The peace loving people donate their hard won gold to place a reward on the head of these bandits. At this time, Billy, a young man of only 21, stands up bravely to rescue the town.