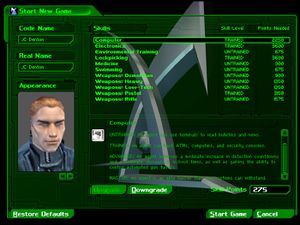 Your code name by default is always JC Denton. You can type in whatever name you want for your real name, although it will not be said in-game (however, it will be shown in various datacubes, newspapers, bulletins, and emails). There are five different options you can choose from for your character's appearance. You only have a limited amount of skill points, so you must choose wisely; you can always downgrade a skill if you made a mistake. By default you already start with the trained pistol skill, but you can downgrade it if you like.

Below is a list of various skills, which is detailed more in the skills section. All of them have four standard levels: untrained (lowest), trained, advanced, and master (highest). Each upgrade takes a certain amount of skill points (which are earned throughout the game for various accomplishments, such as completing objectives or finding a certain area).