From StrategyWiki, the video game walkthrough and strategy guide wiki
Jump to navigation Jump to search
Deuteros: The Next Millennium | Table of Contents | Gameplay | Walkthrough 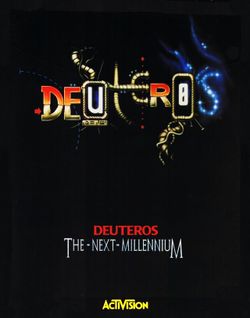 Deuteros: The Next Millennium is the sequel to the sci-fi strategy video game Millennium 2.2, published by Activision for the Amiga and Atari ST. Ian Bird designed and wrote the game, with graphics by Jai Redman and music by Matt Bates.

The game is set some 800 years after Millennium, in a time when mankind has won the struggle to make the Earth habitable again but lost its spacefaring capabilities, which it is seeking to regain.