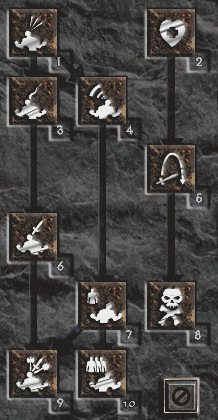 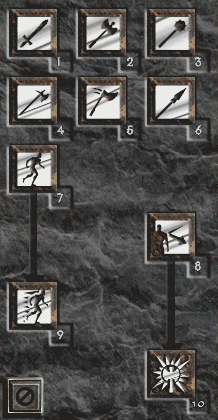 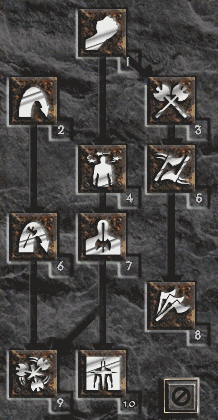 Combat Masteries provide an excellent combination for a small investment with just about any Barbarian. Investing just a single point in a weapon mastery will give a lot of extra damage when using that weapon. Increased Stamina, Increased Speed, Iron Skin, and Natural Resistance are all highly beneficial and worth a single point investment.

Taunt, Howl, and War Cry are good crowd control tools. Howl is the easiest form of crowd control available; spamming it will generally clear out any packs of monsters surrounding you. Taunt works the opposite way, drawing in a single monster, and is very good in combination with Howl, against ranged attackers, or to draw off attackers from a party member. Most, though not all, characters will want to invest a single point in each of these. War Cry on the other hand has more prerequisites and generally needs more than a single point of investment to really pay off, but stuns all enemies within a wide radius for a good length of time.

Leap Attack (with its prerequisite Leap) is another great utility skill worth a single point of investment. Leaping over rivers or into and out of combat with the Leap Attack ability will speed up your game and keep you from dying.

The Find * line of skills might be worth considering investing a single point. Find Potion's main benefit is the disposal of corpses. Find Item not only disposes of corpses but can aid you in finding items, depending on how much skills bonuses you can apply to it. Grim Ward is a tactical tool similar to Howl for crowd control, and with practice can become extremely good for that purpose.

Battle Orders, Shout, and Battle Command is another set of synergistic skills that form the basis of many characters. Investing 20 points in BO, 1-20 points in Shout, and just one point in Battle Command gives a lengthy duration on all three skills and high bonuses from Shout and BO. These are party-friendly skills that will make you welcome allies with just about anyone.

Finally, one drawback of most barbarian classes is that all damage comes straight from the equipped weapon and is almost all physical in nature. This makes Immune to Physical enemies near impossible to kill. Berserk converts all physical attack damage to magic damage, and so can work around both these problems. Once the three prerequisites are met, a single point in Berserk, especially if your build has the synergies Howl or Shout in it already, can be enough to deal with Immune to Physical enemies.

A barbarian with a focus in Concentrate makes an extremely strong tank. With very high defense, an uninterruptible attack, a max-block shield, and the highest life of any character, this setup is superb for playing through the game solo or with help; it is probably the easiest character with which to win solo/untweaked on hardcore. The drawback is the relatively low damage output of concentrate, making the game slower than with many other classes. The basic build puts 20 points each into Battle Orders, Concentrate, Shout, and a weapon mastery.

Frenzy barbs are great duelers; they swing so fast that the competition cant hit back! The basic build puts 20 points into Frenzy with up to 20 into the synergies Taunt and Double Swing, augmented with your choice of secondary skills - such as the Battle Orders and Shout combination mentioned in the above section.

A pure "throwbarb" - focusing only on throwing weapons - may be tempting but is not an effective character build. Such a character is meant to give the player an extreme challenge.

The basic premise of this build is to be a Spartan from the movie 300. To do this effectively, the barbarians must be throwbarbs. With those abilities they can effectively equip a javelin and a shield. This is a very weak character and not a viable build for solo play, but is a role-playing challenge for a group game.