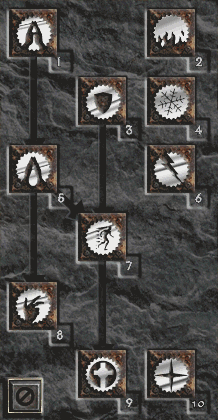 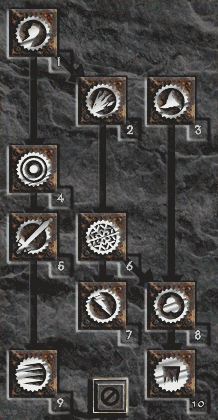 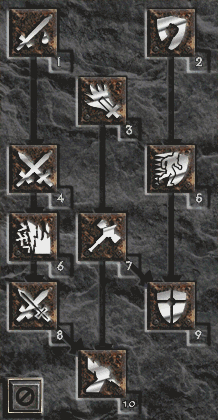 Resist Fire, Resist Cold, Resist Lightning, and particularly Salvation are fairly strong utility auras with just a single point of investment. Even if you have no need for it in your build, a single point in Salvation will most likely come in handy at some point.

The rest of the Defensive Auras can also be very handy with just a single point invested in each. Prayer, Cleansing, and Meditation are all decent auras to switch to at times for recovery, though these are just minor time-savers. Vigor and Redemption are major time-savers; Vigor in particular will speed up dungeon exploration significantly. Unfortunately with Prayer,Defiance and Cleansing as prerequisites, depending on the rest of your build investing in this whole tree will take up to 6 badly needed skill points. Still, most experienced Paladins will at least aim for Vigor here.

Charge is a moderately useful utility skill, for running into or out of battle or quickly sprinting around the map.

For any paladin with a shield, putting one or more points into Holy Shield is an option. Though it has 4 prerequisites, getting your shield up to max blocking will greatly aid survival, and with this skill even a shield with low blocking can get there. The mixed blessing here is that investing in Holy Shield means less investment in dexterity, which often leads to paladins having trouble with their attack rating; of course a paladin without a shield will have this problem as well.

The paladin exceeds all other classes in terms of the number of viable builds. Because it has so many synergies and overlapping skills, many combinations will allow very high damage at all phases of the game.

One issue paladins run into is with too low of an attack rating, meaning high misses. Particularly if you play without a shield (which can be suicide on Hell), you may forego dexterity investment altogether and get a low base attack rating. Additionally, many of the paladin skills, though they give great bonuses to damage, give little or no bonus to attack.

An elemental zealot is built around Zeal as the primary attack with one of the elemental holy auras (usually Holy Freeze or Holy Shock) running. Synergies (Resist *, Salvation) further improve attack damage. Because the elemental aura adds on a significant amount of damage to each attack and zeal greatly increases the number of attacks done, such a character can do quite high damage with even with a marginal weapon equipped. The aura itself also provides extra area-of-effect damage, and the build does both physical and elemental damage so can work around resistance and immunity with little trouble.

The avenger, or conviction paladin, is built around Vengeance as a primary skill with Conviction as the matching aura. Synergies (Resist *, Salvation) add to the vengeance damage. Because most vengeance damage is elemental, and conviction reduces the elemental resistance of monsters to increase such damage potentially many times over, the final damage done is extremely high given a good weapon. With a wide variety of damage types and resistance lowering, resistance and immunity are no problem at all for this build.

The hammerdin is one of the easiest and most straightforward builds to play through the late game, though it does depend on good items and practice to really shine. This character runs Blessed Hammer as its main and only form of attack, with Concentration as the active aura to increase damage. Vigor and Blessed Aim synergize the Blessed Hammer attack, pushing damage rates up to huge levels.

Many other builds are possible within this class. Sacrifice, Zeal, Charge, and Vengeance all have good synergies and are viable primary skills with practice. Fanaticism, Concentration, and Conviction all provide superb attacking bonuses and can be used as a secondary skill with the right attack in place.