Controls of the game are simple, with

to select and, in-game,

to open up the menu, giving you the option to save, load, and quit. The main menu gives you four options:

When the game begins, you'll have to select the character that Yui will be interacting with for the duration of the story. For more information about the structure of the game's routes, see the walkthrough page. 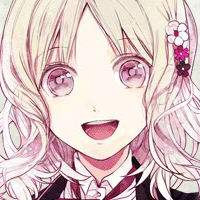 Yui Komori (小森 ユイ) is a kind and gentle 17-year-old student who used to live with her father, a priest who owns his own church. After her father moved elsewhere for work, she was forced to live in a mansion with six mysterious brothers who are actually vampires. In the beginning she was skeptical of their supernatural nature, but came to find no other solution. In a struggle for survival she decides to live with them while bearing the fear of being attacked by each of them. Yui's personality varies by the choices the player makes.