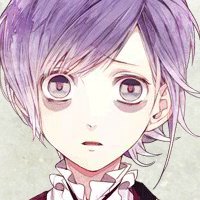 Kanato (カナト) is the middle child of the Sakamaki triplets, the second son of Cordelia and the fourth son of Karlheinz. He is very attached to his plush bear, "Teddy", and is always talking to it, though in his route, he becomes quite attached to Yui as well. Is known for his mood swings; if something doesn't go his way, he won't hesitate to display a violent outburst, though he tends to be sadistic even when calm. However, Kanato tends to show a child-like innocence that his brothers lack, such as crying when Teddy tears. As such, despite his treatment of her, Yui tends to be protective of him and tolerates his behavior in a manner not shown to his brothers.