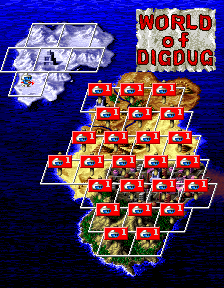 The twenty-fifth round introduces the Dodongadon (from Cosmo Gang: The Video), who can burn away the earth by spitting flames at it horizontally (and have also developed the power to pass through the walls); the thirtieth round also features another Big Fygar (but this time, the text "USE A BLAST!" will appear upon the screen, which means you again have to wait for an Explosion Robot to emerge from one of the four pairs of double doors in the corners of the room, pump him up while the Big Fygar is in his range, while, again, watching out for the bursts of flame from the flamethrower built into his robotic body and explode him in order to register 2.5 squares' worth of damage upon his life bar). As his life bar is once again composed of sixteen squares, you will now have to do it seven times to destroy him, but once you do it five times he will again glow red and speed up - and he is worth 50000 points. When the game returns to the overworld map, the screen will scroll up to the sky, and flash white; once it has faded back to normal, the Dig Dugs will be on the Moon, which forms the basis for the next twenty rounds (Rounds 31-50) and replaces the Rocks with Containers (from both of the Cosmo Gang games).