Digger: The Legend of the Lost City

Digger: The Legend of the Lost City | Table of Contents | Gameplay | Walkthrough 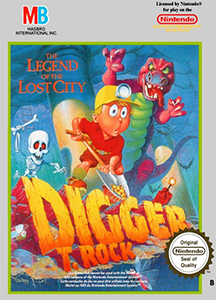 Digger T. Rock: Legend of the Lost City is a 1990 platform game developed by Rare and published by the Milton Bradley Company for the NES. It was released in North America in December 1990 and in Europe in 1991. It was the first game to be developed by Rare. The game was later included in Rare's 2015 Xbox One retrospective compilation, Rare Replay, which also includes Solar Jetman.

The game centres around the miner Digger T. Rock, as he scours various caves in search of the legendary Lost City. The player controls Digger during his exploration. The player can find and use some items such as ladders, stones and dynamite, thanks to which he will be able to open the way and access new areas. The game is divided into eight caverns, which must be explored by defeating the enemies that lurk there and overcoming dangerous precipices. The goal in each cavern is to locate the exit door and a special pillar which unlocks it. By pressing this pillar, a countdown timer is activated, during which the player must reach the exit door before it closes. Between one level and another there is then a bonus area where the player has the opportunity to earn an extra life. There are also trading points where the player can trade the treasures obtained for useful items. The game received mixed reviews upon release, with praise directed at its playability but was criticised for its poor graphics and presentation.

Digger T. Rock is a brave miner who loves to dig for buried treasure. Digger has always been fascinated by the legend of the Lost City, an ancient buried city full of treasures and relics. One day, while exploring a deep mine, Digger comes across a stone sign that says "Lost City", with an arrow pointing down. After some hesitation, Digger takes the shovel and begins digging, determined to find out if the Lost City really exists. Here the adventure begins. You will have to go lower and lower, clearing your way with the shovel and crossing one cavern after another. You will encounter deadly precipices that you will have to overcome and hordes of enemies ready to block your way. Only after overcoming hundreds of dangers you can finally reach the legendary Lost City.