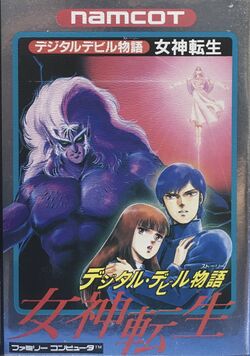 Digital Devil Story: Megami Tensei (デジタル・デビル物語 女神転生, Dejitaru Debiru Monogatari Megami Tensei?) is the first game of the popular Megami Tensei series of console role-playing games. Although Atlus has published a majority of the series, the first two games were created by Namco, after it bought the video game rights to the Japanese horror novel series by Aya Nishitani, the first named Digitial Devil Story.

It was released for the Famicom by Namco in 1987. A game of the same name was released on the NEC PC-8801 and MSX from Telenet Japan, although the RPG aspects were cut down drastically. In 1994, Atlus remade the Namco version, along with its sequel Digital Devil Story: Megami Tensei II and released a single Super Famicom cartridge titled Kyuuyaku Megami Tensei. These games have never been released outside of Japan.

Digital Devil Story: Megami Tensei features several gameplay elements that became standards in the rest of the series, including demon catching and fusing and first-person dungeons. While exploring dungeons, players are given an automap, which fills itself in as the player progresses in the dungeon. The game does not feature a save option, but does give passwords in towns, although the remake contains a save feature.

Akemi Nakajima is a high school student and a computer programming prodigy who created a program that can summon demons from Makai. His original intentions for the program were to gain revenge on a classmate who had fought with him. He brings his friend Yumiko Shirasagi, a transfer student that became interested in Nakajima and found to be the reincarnation of the goddess Izanami, to combat the malicious demons he unleashed. Nakajima had been tricked into summoning a demon named Loki with his program, whereas the American computer genius Isma Feed has summoned the demon Set in order to use its power. The game is assumed to take place after the first two Digital Devil Story novels when the demons Loki and Set have been defeated. The demon Lucifer has revived them, though, in order to prepare to invade the human world once again.