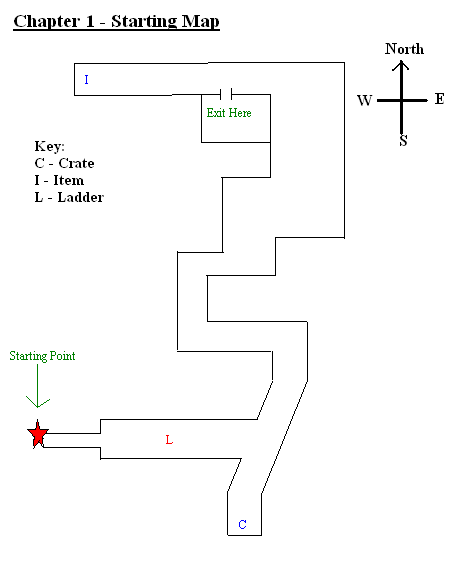 After the opening FMVs get ready to fire. There are three Deepground soldiers in front of you and they're probably already firing at you - so shoot them off. Continue to pick up the potion, then climb the ladder. There are 2 more Deepground enemies further on, so blast them away. One of them even leaves you some handgun bullets (36 of them). Take a right at the split then destroy the crate for 500 Gil then turn around and go left at the junction. Now, to the west of you is a bunch of soldiers conveniently around a barrel. The barrel contains explosive material - so rather than aim for them and risk getting hurt as you pick them off, make sure you're a reasonable distance away and shoot the barrel. The northwest dead end yields a potion.

Go back and make your way down the staircase, there are 3 Deepground soldiers that block your way down, so neutralise them. A mission comes up, 'Protect the Civilians!', so protect them by gunning down the soldiers that are after them. Further details of the mission are provided in the 'missions' section below.

Progress north for a few potions, and in the southern part is a boy that needs saving. Return to the main path and next turn right to gain the Fire Materia and a short tutorial on how to use it (equip it, press L1 to aim it, then L1 again to release magic), there's also a mako point to charge up your magic.

Continue onwards, and when you see the laser gate (blue lasers blocking a certain path), examine it, then look behind you as a Deepground soldier will be spawning. Kill her to get the key card, then use it on the gate.

Blast your way along, and make sure you pick up the Limit Breaker one of the first guards drop when he is disposed of. At a certain point you'll see a cutscene, and so you have to save another citizen (Mission: 'Save the Abducted Girl!'. To do this, take out all the surrounding soldiers, there's also a few snipers on the second floor windows. Open the container by going up to it and pressing 'X' and kill the dog within. There are also a few item cases around, which contain a hi-potion, a phoenix down and a potion.

After the touching reunion between mother and child, go back to the main path and continue west to get the Sniper Scope, then turn into the other alley. Annihilate all the soldiers to get the next Card Key and head to the next laser gate to unlock it.
There are more enemies here to destroy, do so and proceed to the top floor to get the phoenix down and 180 handgun bullets. Then go back downstairs to find another 4 soldiers, so dispatch them, and make sure you get the Long Barrel, which one of them drops. Get the hi-potion and the bullets from the cases, then leave for the sub-boss fight.

Make sure that the Long Barrel and your Fire Materia are equipped and blast away! Just make sure that the buildings don't get in the way. Avoid the missiles by dodging and jumping. There are mako points and boxes that if broken, contain weapons and restorative items, so use them if you have to. Once you've damaged the Dragonfly enough, a bunch of soldiers come out to try and spoil the fun, so kill them off.

After the boss battle, you'll be back inside. Pick up the Short Barrel, and the first room on your left holds 500 gil and 180 Handgun Bullets and the second door to the left has a shop machine so you can restock on items. Leave the room and behind the desk is the Phoenix Down. Go upstairs to trigger a cutscene.

Equip the Short Barrel so you can dispatch the soldiers quickly, one seems to have a lot of HP, just keep firing away at him and he'll eventually fall. After disposing of all the soldiers you trigger another cut scene.

Th cutscene will leave you in control of Vincent outside with the mission 'Assist the WRO!', where your main objective is to get to the door where there are stacks of boxes and mako points. Note: The number of DeepGround soldiers running toward you is infinite, so if you want loads of experience at the end of the stage, go ahead and blast away, if not, run, hide and wait for your WRO troops to arrive. Three Potions can be found in the crates, and go through the newly opened exit. Around this new area you'll meet a WRO soldier who you can also shop off've, do so if you wish.

The next bit is very linear, grab the Griffon and the 200 Machine Gun Bullets then follow the WRO members, assisting them in disposing of the DeepGround soldiers on the way. One of the soldiers drops the accessory Cerberus Relief, and at a corner there is a stack of boxes, destroy them to get the Card Key then use it to open up the gate that leads to a dead end (you can determine this by looking at your map). Behind the gate that leads to a dead-end, where you'll find 500 gil and another card key. Use the other card key on the other gate, jump to the higher sections to get 180 Handgun Bullets, and proceed towards what is a big red dot on your map. Prepare for another boss battle.

This boss is pretty much the same as the one you encountered earlier, so the strategy for it is basically the same, although you can use the Griffon instead of Cerberus. After you have dealt enough damage, the Dragonfly will break down, and every shot you deal will be a critical hit (therefore it's recommended that you use the Griffon for at least this part, due to it's faster firing rate). Dodge the rockets by dashing and running when they get near you. Repeat above method until it's defeated (it isn't that difficult to beat).