This map will help to build characters up in order to prepare for the challenges Etna will face. There is a single Geo Square with +50% Attack and Defense. Send out one character to this square and destroy all opposition. The idea is to repeat this map until at least a small group of characters can defeat it solo before continuing. If you are feeling defensive, you can put Etna on the Panel square and move all of the Prinnies to each of her sides in a "cross" formation. However, Etna must have a Spear, Bow, Gun, or Staff with at least one spell on it equipped if she is the character your'e powering up, since these are the only weapons that can hit enemies from that far away. 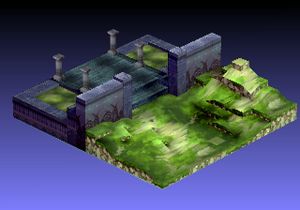 OK. Here, all you have to do is destroy the Ally Damage 20% Geo Symbol to weaken the enemies standing on the yellow Geo panels. You may also want another character to throw the blue Experience +50 symbol onto the panel next to it,then end your turn. The rest of the map should be pretty much rough and tumble from there. 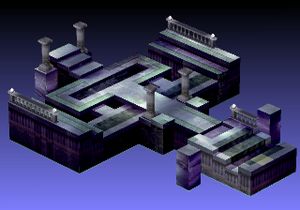 This map is just as easy as Magnificent Gate. You have two Ghosts behind you and in front of you as well as two more behind them. You also have two Hobbits WAY at the end of the map along with an Attack +1 effect on your panels and a Recovery 20% Symbol to help you. First, throw the Recovery symbol onto your panel pool. This helps you against the enemies if your'e underpowered. Next, take out the two ghosts behind you and in front of you. This can be done with two teams each tackling a pair of Ghosts. Then, take out the other Ghost pair. Now, if your'e underpowered or defensive, you will want to lure the Hobbits to you so you can take advantage of the Attack +1 effect. Have two characters march over to and throw the Hobbits right next to the entrance to the panel pool. DO NOT throw thwm onto the panels! Now, have two characters act as a barricade so that the Hobbits canot enter. Combo the Hobbits and your'e done. 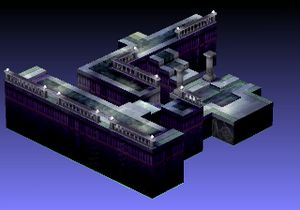 Slightly higher difficulty, but not a totally hard map. You are surrounded by ten Ghosts, five on each side. One of the pairs also has two Archers to help them from long-range along with a Samurai with a Spear standing WAY at the left corner of the map with the other pair. There are two Geosymols with Damage and Recovery 20% effects respectively. There are three ways to go about this map. You can either throw the Recovery symbol onto your panel pool and fight the Ghosts one-by-one. This is easier if underpowered. Experienced players can throw the Damage symbol onto the panel pool and lure the Ghosts out and fight them. Note that the Archers will not move or attack unless you move within their range, so they will not fall for this. Note also that the Samurai will move from her position towards yours whether you are ready or not after at least 2 turns have passed. If the Ghosts are dead and you used the Recovery strategy, nix it and throw the Damage symbol into the pool and Recovery out, then move all characters from the pool. Position them so that the Samurai cannot escape the pool. Weaken her if you wish, but she will, with proper strategy, submit to either your weapons or the Damage 20% effect. 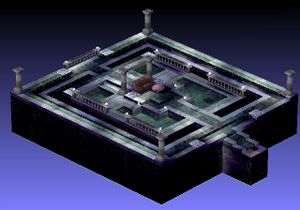 This map is exactly like the end of the first episode of the Laharl story, just without Laharl. To weaken the overpowered enemies, throw a sword or magic user over to the three Geo Symbols and move him/her over next to them. Then, nail them with a 3-square arrangement (Third option in range cue) spell, or with Blade Rush/Dimensional Slash. Then take out the enemies on the panels that formerly received the benefits. Everything becomes a generic beat-em-up until Mid-Boss is the last enemy standing. Note that he may enter the fray himself if you are either too close to him, or if the battle drags out for too long. (I'd say a minimum of 2 turns.) Here's the hard part. Gang up on him and attack him in a combo of attacks. Hitting him with one attack at a time will take too long and will be weaker. DO NOT get into a counterattack war with him. He will pummel you into the ground if your weak enough. He also can hit you with a special attack that can damage any character standing in a 3-square vertical line. Watch out for that.