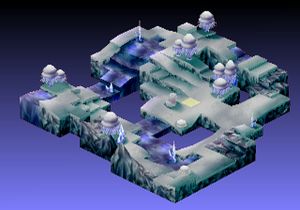 Make some Prinny characters before coming here. They need not be equipped with anything, but they save you at this map's start. Feel free to dispose of them afterwards. This stage's boss is surrouned by Wingmen. And they are protected by Durians. (Recolors of the Prinny classes, not accessible for creation or recruitment.) One thing unique about Prinnies is that of they are thrown, they explode. And....if another Prinny is in the vicinity, he will explode too, ad infinitum. Throw one of your Prinnes at the first row of Durians to instantly get rid of them. Do the same to the other row. As for the wingmen, they aren't tough. Remember that they can Counter pretty easily and can cause Poison and Sleep with their specials. The boss, Antoire, is a Succubus recolor and has the exact same abilities as said class. Her only quirk is that, like all Succubi, she can suck the HP from your characters with her specials. Just combo her to death, she isn't a terrible opponent. If you're feeling sadistic or defensive, try to Paralyze or put her to sleep. This way she cannot siphon your HP or use her abilities on you.

Upon completing the stage, Antoire will join your party. She fights just like the Succubus class monsters and should be treated as such. Her stats are mediocre, but she is immune to all status ailments, her resistances all capped at "99". This make her a good tank against status-wielding enemies. 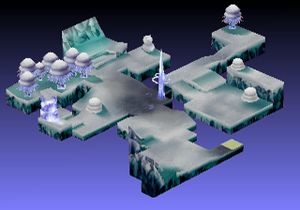 At the start of the map, you have Four Wingmen surrounding a Damage 20% Geo Symbol. Along with them, there are also three more, slightly stronger Wingmen. Behind them is a Ninja wielding a Spear as well as an Axe-wielding Ninja a little further away. As if that weren't enough, there are three Archers waiting on the other island penninsula facing the map. This area is completely covered in blue Geo panels, along with a Blue Geo Symbol that give the Archeres an extra attack. Now, the trick here is defeating the enemies on your side of the Island while waiting for the Archers to cross the "bridge" leading to your side. You HAVE to defeat the Wingmen surrounding the Symbol on your first turn, or else they will swarm you. If you wish, you can also throw the Damage 20% symbol onto the Archer's island.(Most of them will most likely have moved onto the mainland by the Ninjas at this point. Although some may attack you from long range.) After that's done, the Ninja and three Wingmen will move in to attack you. Try your best to stay on the left side of the map that you started from, as far from the penninsula as possible. Otherwise, the Archers will move to the edge of their land and attack you with their bows. With their extra attacks and other enemies, that's a no-no. Assuming you defeated all other enemies, the Archers can attack you, but you have Ranged characters, too. Attack the Archers from your side of the field while either sneaking or throwing soem close-range characters onto their land as well. The Archers may have extra attacks because of the Symbol, but they CANNOT go over their Counter limit, now matter how many benefits they have. Also, if your ranged characters are being sniped by the Archers, have close range characters (Axe-users recommended) thrown over to them to take them out more effectively. 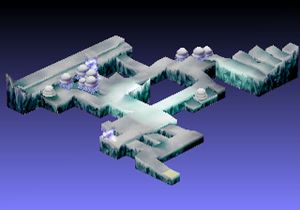 Compared to what you've endured up until now, this map's cake. You start this map up with a Damage 20% and Silence effect combo. However, all you have to do is throw the Damage 20% Symbol onto a panel of the same color as that of the panels the enemy is standing on. Then, place high DEF characters in front of the various lines of enemies, trapping them in. Then, all you have to do is maintain your position for six turns, having your Healers support you. The enemies will then be destroyed by the effects and you win instantly. If you want the extra Experience or just want to be more honorable instead of cheating, then dispose of the Damage Symbol as soon as the battle starts like before, but destroy it instead of throwing it away, or simply ignore it. Then, just fight the enemies like normal. Watch out for the Golem's specials as they can affect a party group. Also, destroy the Ninja as quick as possible, he's the strongest enemy here. 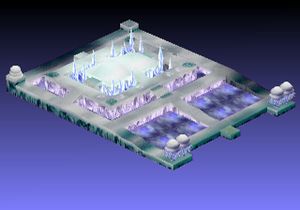 This map has the same strategy as the last one, but with less maneuvering room and no Geo Symbols to assist you. As before, block the Ghost lines with high DEF characters. However, these characters should have, and by all means use, any area-of-affect skills they have aquired throughout the game's course. Mage and Archers should provide support fire from behind the meat shields. Axe and Fist users simply lack the attack range to be effective here. Once the Ghosts are cleared out, or have only stragglers, mop up any remaining enemies and then combo the Reaper to death. Keep in mind the Reaper's high attack range and damage.

This map not only marks the hallmark of the last set of stages, it also has no definitive strategy. Therefore, play it however you like. Just keep in mind that the Zombies can poison you with their specials. Also, the Gargoyles can siphon your HP with their specials as well as Paralyze you. Some Status resistance may be in your best interest if you are underpowered or defensive. Remember that Antoire is immune to all status ailments, so she can fight most of the enemies here without fear of their attacks' effects.

The penultimate boss to Etna Mode is not easy, but only LOOKS extremely intimidating at first glance. However, If playing from a new game VIA the Cheat code, your characters will have to be considerably tough through Item World or revisit grinding in order to survive. Their attacking stats must be at least 500, and their HP past 400, at the very least. Stealing some item copies from the "River of Lava" Zombie makes this a bit easier to achieve.

Two lines of five Zombies each along with Two Gargoyles and two Healers assisting the boss. This spells a recipe for disaster, but can be slightly diminished with an old familiar tactic. Block the Zombies with your Highest DEF characters. This way the Zombies cannot swarm you.....After all, the second row will not move or attack unless there is an opening in the first. Attack the Zombies with all your might with attacks such as Winged Slayer, Chaos Impact, ETC. Be sure that Antoire is a part of your'e Zombie-killing team. Her status immunity makes her a great asset. If you're impatient, you can also attack the Zombies right away and ignore the blocking tactic. However, this will cause them to swarm and destroy any character with low Status resistance. Once the Zombies are cleared, have two characters lure the Gargoyles away. Don't move TOO close or Maderas will follow. Alternatively, you can simply pelt the Gargoyles with Magic and long-range attacks. After they fall, either snipe the Healers to death with long-range magic........ (Any other type of attack requires you to be somewhat close by, which may attract the Vampire to your attention. You could try sniping from the left and right of the map, but most characters and weapons lack the range and height requirements.).....or attack Maderas first and destroy him. Use the same Combo-and swarm method to kill him. As with all other major bosses in Etna Mode, DO NOT enter a Counter War with him. He has 4 of them. This will easily kill most generic characters. He also has access to attacks with various attack ranges, including one that can hit in a "cross" formation. He also has a fire attack, so characters with low Fire resistance should be even more carefyul. Finally, kill the two Healers with extreme prejudice. (Also, be sure that Antoire, if used in the battle, returns to the Base panel after the Zombies are destroyed. She may be immune to ailments, but not to damage. She simply lacks the offensive and defensive abilities to be able to effectively battle the remaining enemies, even with other characters supporting her.)

Note that this will be your absolute last chance to customize or power up your characters or armor before the game ends, so do so NOW! Advance only when you are ready.

The final map of Etna Mode. Here, you have six Angels, two wielding Spears and well within your range of power, and four slightly above, two with Bows and two with Swords. Then the boss is behind all of them. You also have four Geo Symbols, all of them with beneficiary effects, not on the purple panels. The first thing to do here is to kill the two Angels nearby you. Try you absolute best to kill them on your first turn. If the turn ends, all of the Angels wielding Swords will come at you and may heal the ones you left standing. Use area-of effect attacks as well as long range and Magic to defeat the Angels. Be advised that ALL of the Angels are wielding Magic and Healing spells. You can throw some of the symbols onto the panels and kill the Angels off using their benefits. Once the Angels are dispatched, Vulcanus is your final enemy. With over 10,000 HP (Or 100,000 if started as a New Game+!) and a lot of Counters, he's your biggest obstacle. Combo him with extreme prejudice. Make sure your healers are well out of range of the bloodbath, otherwise, they may get hit by crossfire. He has no unique quirks, although he has one special move that can deal Paralyzation as well as some decent damage and he can fling it anywhere within a 3-panel radius, despite it only being able to hit one character only. He also has a move that can hit any horizontal 3-character line directly in front of him, but there's no quirk to it. One way to defeat him is to lure him nearby the Purple panels, then throw some symbols onto them, allowing you to gain an advantage while fighting the Archangel. Be aware that it's a big mistake if he's able to step on these panels himself, so try to block him as much as you can.

One character that can be a great asset to you on this map is the Ninja. He has the best evasion rate in the game and can evade most attacks with a high SPD stat. Use him to absorb most of the attacks that will be coming your way.

An easy way to win this fight is to either boost high attack and hit, or boost high defense and speed, or even try for high attack and speed. Vulcanus just barely survives a hit over about 10,589 damage from Calamity Drive from an Etna at level 305 with over 8,000 in attack and over 3,000 in other stats, as well as maxed Axe mastery!