Disgaea: Hour of Darkness/Episode XIII: War of the Netherworld, Part 2 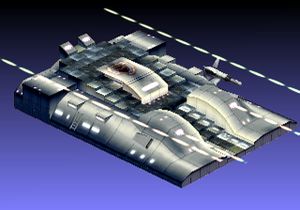 Your goal on this map is to reach the yellow tile behind the canons. This can be quickly and safely accomplished by stacking your characters and thorwing them over to it. 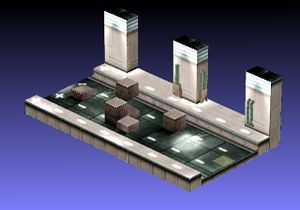 With only 6 enemies, this is a simple and easy map. Watch out for the ones using guns, as they can cause sleep. 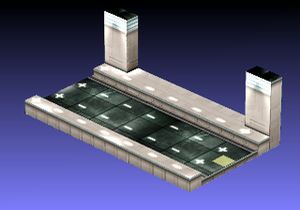 Very similar to the previous battle, with slightly stronger enemies. 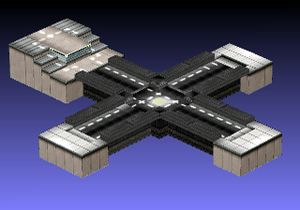 This map is affected by Enemy Boost +150%. Each of the Geo Symbol providing this bonus is in a different corridor than the others. You will want to destroy these symbols first. Kurtis will come and attack your party after a few turns, so be prepared.

Stack some characters and throw them toward a geo symbol. Try to use as few characters as you can, because you will need to throw them in 3 different directions. After the symbols are destroyed, your characters will be spread out all over the map. Try to move them to safer locations while dispatching the soldiers.

The fastest way to destroy the geo symbols is to throw enemy units on top of them. There are 3 geo symbols located in the NE, SE, and SW forks (if you tilt your head to the left that would be the right, bottom and left forks). Use characters that have 6mv such as thieves and ninjas to run up to the swordsmen astronauts to lift and throw them onto the geo symbols to destroy them.

You may want to send out your stronger units all in the same direction and let your weaker units take out the other two symbols, having them toss each other if necessary to reach their destination; you can start battle as early as the first round.

Focus your strong group's effort (if you only have one) to take out one fork at a time. Note that the sword wielding enemies will be farther back and may be out of aggro range, so they can be dealt with later (even after clearing Kurtis). 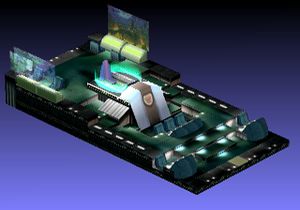 The angels you will be fighting here can cast Giga Heal. For this reason, you will want to focus on killing one at a time. Be prepared for a long battle, as both sides should be healing their members.