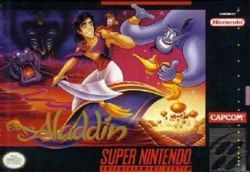 Disney's Aladdin is a game based on the animated film of the same name, developed and published by Capcom for the SNES. In 2004 it was ported to the Game Boy Advance. There were also unauthorised ports to the Genesis (as Aladdin II) and the NES. It is completely unrelated to the Aladdin titles developed by Sega and Virgin Interactive.

Jafar (Aladdin's nemesis) has searched the Cave of Wonders years for the magic lamp and still hasn't found it yet. Can you help Aladdin find it before Jafar gets his hands on it and brings it back to Agrabah? Aladdin and his monkey friend Abu are on a search for the lamp. Aladdin will have to race through the city of Agrabah, the Cave of Wonders, Jafar's lair, and battle Jafar himself to cleanse the evil from the land.