These aren’t the typical enemies you’ve encountered so far. Fortunately, they are mortal. 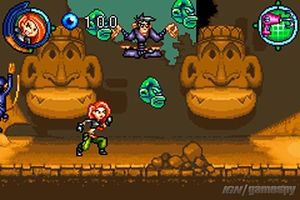 Monkey Fist decides not to attack directly, but instead to levitate around the screen while Monkey Idols floating around him do his fighting. Jump at him and attack to swat the Monkey Idols away. Defeating all the Monkey Idols causes Monkey Fist to fall to the ground in a daze, so run over and pound away before he shakes out the cobwebs and calls more Monkey Idols to help him. Kim or Ron can win this fight the first time around, but if you decide to go back and fight him again, Ron’s Mystical Monkey Power won’t work on him, so Kim is the better bet for later encounters. Each time, more Monkey Idols surround him and make it harder to knock him out of the sky, but you’ll have to repeat this pattern about three or four times to take him down for the count. Single players though, will have a tougher time because you can only control one character at a time and Monkey Fist is one Boss where there is no safe place to keep your unused partner. Since he floats all over the screen, your partner will be easy pickings for a Monkey Idol attack. So work fast to defeat him so your partner doesn’t take too much damage.

This is an enemy that either Kim or Ron can defeat, since you can only go for one hit at a time. Simply keep your partner safely on one side of the pool, then jump on the floating platforms and avoid the tentacle attacks, hitting at the beast until it goes down. The platforms can’t support your weight for long, however, so keep moving and don’t stand on a platform for too long.

Shego moves pretty fast and like Monkey Fist,Ron’s Mystical Monkey Power doesn’t work on her,so single players are better off using Kim for this fight.Shego strikes fast and hard and fights a lot like Kim does.But if you’ve taken the time to explore the game, you should have both Kim and Ron’s Life Meters maxed out, so you should be able to outlast her in a toe-to-toe slug fest,Just make sure that Ron is safely out of range of the battle,then stay close to Shego and keep attacking.Whale away on her enough and she should easily go down before you do.

Like Senior Senior Sr.’s Mutant Octopus, this is a fight that either Kim or Ron can win, so pick your favorite, make sure your partner is safely behind Drakken’s forcefield and get ready to rumble. Drakken doesn’t fight you himself, but rather hides out in a flying pod that has an arsenal of four different weapons. He switches each weapon out after he’s taken a certain amount of damage. Fortunately, his pattern is easy. He attacks once, then his power core drops out of his pod, allowing you to attack it. Again, like the mutant Octopus, the power core only takes one hit at a time, so this fight will be time consuming. But once you know the pattern to each of his weapons, they are easy to dodge. Just stick with a hit n’ run method and you should have no trouble taking the mad scientist out and winning the game.