There are various minor enemies in Kim Possible 3. Some of them wear different colors to indicate how much damage they can take. However, all of them can be defeated in one hit by Ron’s Mystical Monkey Power Foot Stomp.

These snakes are pesky, but don’t attack often, so you have a wide opening to attack and defeat them. Be careful, some of them spit venom!

Unfortunately, these enemies can’t be attacked, but they are as helpful as they are threatening. While they serve as stepping stones in rivers, they will occasionally snap at you and dive into the water, leaving you without a leg to stand on. Watch their eyes. Once their eyes move, they’re about to attack, so leave them alone and wait for them to resurface to jump on them.

First they’re used by Monkey Fist, then Drakken uses mind control on them. Fortunately, they’re not very fast, so beat them to the punch and take them out.

These are big and strong, but not much else. Wait until they’re close enough, then attack before they do.

Señior Senior Jr. is another enemy who can’t be attacked, but since all he does is stay on the sidelines and throw disco balls at you (which can be easily avoided), he’s not exactly someone you have to seriously worry about. 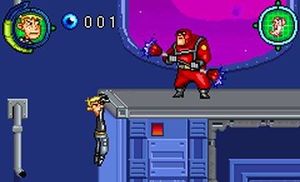 Drakken’s usual assortment of Stun-rod toting goons are always running around. Fortunately, they follow the same rules as the Seniors’ henchmen. Just make sure you beat them to the punch.

This enemy can’t be defeated in the usual way. Fortunately, it’s programmed to only attack one target, Kim. Move Kim close enough for it to attack, then activate the HoloKim and move to safety. While BeBe’s trying to attack to HoloKim, send Ron jumping over her to hit the power switch on her back.