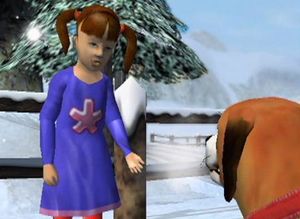 Help the girl who has lost her coat.

You will arrive at this level on the train, and the thing you will spot most instantly is... snow! In this level there are no snowball fights or snowman building, the only thing the snow does is make Jake lose health faster. Switch into SOV as soon as you get to this level, as there are purple scents in the shelter and on the stairs leading to the other side of the station. After collecting them, go into the car park (parking lot) from the slope behind the shelter and you'll find some more purple scents. You'll also find a girl in a purple dress. Talk to her and she will tell you that some mean boys took her coat to dress their snowman. If you follow the footprint trail, it leads to the ski slope area, because that's where the coat is.

There is a black coat lying in the café, but the girl will tell you it's the wrong coat if you give it to her. So go to the ski slope area, and unless you know your way around, follow the footprint trail. You may have noticed a small cabin about half way up the slope. Go inside and you'll find a yellow coat (folded up neatly) in the middle of the room. Pick it up, and take it back to the café. Give it to the girl and she will put it on. To do this, while you are facing the other way, she disappears and reappears with it on. Occasionally she might reappear beside you. Then she will ask you to follow her. When you do, she will stop at the end of the pier and tell you this is where she found her dog's collar. Then The Dog Catcher will come along and you will have to flee from his Doberman (again).

You can run onto the ice and when you get to the other side run back onto the ice in another direction. Or you could run to the left and go round the fence and into the station, then jump up onto the platform with no train in front of it. There are quite a few other ways of escaping The Dog Catcher's Doberman as well. When you have escaped from him, the train to Boom City will arrive at the empty platform, but don't go on the platform or you'll end up going to Boom City. There are still plenty of levels with bones at Lake Minniwahwah. 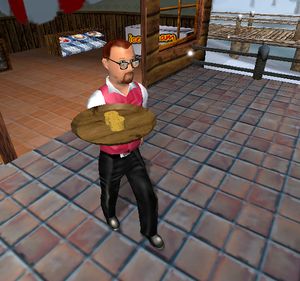 The waiter needs you to chase those pigeons away!

If you go to the café, you will find lots of people sitting at tables and yawning, and you will also find a waiter. He is carrying around a tray with something on it that looks like a cross between a sponge and cheese. If you talk to him, he will tell you that the pigeons are pestering his customers, and he wants you chase them away. If it's your first time playing the game, you'll probably just bark at the pigeons and chase after them when they land on the ice. It's possible to scare them here, but by the time you've got to the next place where they land, they probably will have flown off, because Jake isn't very good at turning on the ice.

A better strategy is to use the local dog. Find the eight cyan scents around the car park and café, and then you'll be doing the digging challenge. Dig seven holes (in the right places) and you can control the Boxer dog. Now, to get rid of the pigeons you need to bark at them with the local dog, and then chase them onto the ice. You'll soon notice that this dog can turn on ice much quicker than Jake can, so you can follow the pigeons about. As soon as you go near them when they land in the last place (the far left side of the ice from the pier) they will fly over the cliff. The waiter will say you're like one of those mythical creatures with marvellous magic powers, and then he'll give you a bone.

He's a bit of a wanderer, and he also has better grip on ice than Jake, but if you worked hard in Clarksville you will be able to beat his 20 bones in a digging challenge or a race, and he can help you to get rid of some annoying pests bothering the customers.

If you slide across to the other side of the ice, you will find eight green scents and a violet scent. This level has probably the second hardest scent collection in it. The reason being that you have to collect violet scents whilst trying to walk around on the ice. The first violet scent is in the snow, so you don't have to do any sliding yet, but all the rest of them are on the ice. The first eight or so are in a trail along the ice, but try not to miss any or if you do, try and go back and get them. The eighth one (well, it's probably the eighth one) is near the area with the stairs that goes to the café, and the next one after that will lead towards the small island with a tree on it near the edge of the ice. The one after that is on the island and the last two are in a trail leading to the pier where the girl is standing. Once you've gotten the twelfth one, a bone will appear in the dog bowl.

Go back to the other end of the ice now, and get the eight green scents. They're spread out along the bottom of the cliff. When you've found them all, you will be in a race against the Boxer dog. The race goes onto the ice, and around the island. The chances are you'll fall far behind here if you try to get all the treats, so aim straight for the island, run round the tree, and follow the dog treats now. After that, the race goes up a mini hill, around the car park, through the station, and to the finish line by the café. A bone will appear in the dog bowl if you won. Now, you can eat the bones.

Switch to SOV and go behind the café. You will find a few purple scents, and you will also see where a bone is buried. Dig up the bone, then go up the hill to find another one just lying on the ground. Eat that one too. Go back to the café, and beside it you will find a bin that smells of a bone. That can only mean there's a bone inside, so run at the bin and knock it over, and eat the bone. 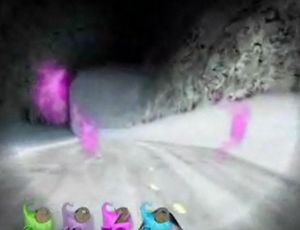 Three purple scents are on the road to the ski slope.

Now, for the final bone in the level you need to look for purple scents. There are five around a tree behind the café, two by a lamppost in the road, three on the road going to the ski slope, three or four by a tree next to the car park, some in the car park itself, four inside the café, quite a few in the dining area outside the café, and some on the other side of the ice. Remember to use

if you're missing any. When you've gotten all 50, a bone will appear in the dog bowl. Eat it, then go into the kennel to save the game.

Now go to the road and go down the road that looks like it's going through a tunnel. You've now arrived at the Ski Slope.