Chase the fox away from the chickens.

When you come to this level, you may notice a man (Murral Chicken-Wing) walking around with a gun. Don't worry, he won't shoot you. You will find out why he's holding a gun when you go and talk to him. He will tell you that he wants to get rid of the fox that's been after his chickens ever since his Foxhound (Sadie) disappeared. To get the bone from him, you need to chase the fox. It's a bit like the pursuit challenge, only there is no time limit, you are chasing a fox instead of a dog, and if you get too far away from him, the fox won't stop to let you catch up. Wait in the middle of the chicken pen, and when the fox comes in, start chasing it. If you are lucky, then at some point the fox may just run into you carelessly, but that rarely happens. Try taking shortcuts, like going the other way around rocks or trees, and you'll catch the fox in the end. When you've caught the fox, you will see it run away into a cave, and the man will give you a bone.

He will then tell you that the dog-napping was in the paper, and that he tore it up to use as bedding for his chickens. He then asks if you can find it for him. First of all, go and look for eight orange scents. They are near where a bone is buried. Dig up the bone if you want, then collect all the orange scents. You can now do a Tug-O-War with the local Pug. Although the Pug looks more like a bulldog with grey fur. When you have beaten and taken control of him, go through one of the holes in the fence and into the chicken pen. Jake will give you a clue when he says "Now where's that bedding? Guess it must be in the coops." That's where you have to look.

Try and get inside the chicken coops, and in all four of them, pick up a piece of paper. You don't have to take each one back, because the Pug seems to eat them or something when he picks them up. When you've collected all four pieces of paper from all four chicken coops, the Pug will automatically take them to the man. He will read about the dog-napping out loud, and that it has now spread to Lake Minniwahwah. Then he will drop a bone. Jake recalls hearing the name Lake Minniwahwah before... 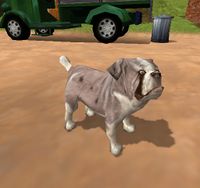 He's easy to catch in the pursuit, and you can easily beat him in the Tug-O-War, all because he only has 5 bones. He may look like a Bulldog, but he isn't, and as long as you can beat him, he might be of some help in finding pieces of newspaper...

Blue scents on a chicken roof[edit]

If you stand facing the chicken coops from the direction of the house, there is a blue scent on the front left one's roof. Jump onto the roof to get it, and the next blue scent will appear on the coop next to it. Then the one after that will appear on the opposite coop, then the coop next to that one. The fifth blue scent will appear in the hole in the fence next to the coop you are standing on, and after that they go in a trail, jumping over a few tree stumps, to the dog kennel. This means you don't have to go anywhere to eat the bone. Now try looking for purple scents. There is one behind the house, a few around the truck, three on the log going across the river and thirteen on the other side. A bone will appear in the dog bowl when you've got them all.

Find eight pink scents around a fallen tree and two or three in the forest, then catch the Pug in the pursuit challenge. Two pursuits in one level. When you have caught the pug, a bone will appear in the dog bowl.

Dig up the bone that's buried if you haven't already, and eat any bones in the dog bowl. Then knock over the bin behind the truck and eat the bone inside. The final bone is in the back of the truck. Eat that and go back to the kennel to save the game.

Go back along the road to the Big Field. When you come back to the Farmhouse level, turn right at the fork, go along the road, and you'll soon arrive at the Village Houses.