Go into SOV as soon as you get to this level, because in the small stretch of road leading back to the Village Houses are three purple scents. Collecting all the purple scents on this level is relatively easy, because most of them are in the road, along the path going up the hill, or behind the supermarket. Collect them all and a bone will appear in the dog bowl.

If you go through the tunnel near the butcher's shop, you will find a garden with low walls surrounding it on all sides. Jump into it to get inside. That may come in handy later. In the grass in one of the other gardens there is a bone buried underground, so dig it up. Behind the garden with low walls, there is a violet scent. It's easier to start getting the other ones if you collect it running away from the tunnel. The next two will be in front of you, and one will be in the garden with low walls. This wasn't the reason it would come in handy though. If you are facing away from the building that the garden is behind, go through the alleyway on the right side and you will find two more scents. The rest are dotted around the road, including two near the flowerbed, one near each of the trees, and one by the path going up the hill. When you've collected all twelve, another bone will appear in the dog bowl. 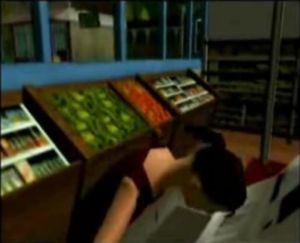 Use the Doberman to get the bone from the cashier.

If you go into the supermarket and talk to the lady at the till, she will say she has a bone for you, but you can't have it. She then tells you to beat it before she loses her temper. You can talk to her more than once, but she will always say the same thing. To get the bone, go back out onto the road and find the eight green scents. Then you will be doing a race with The Dog Catcher's Doberman (yikes!). The race goes along the pavement, through the smallest alleyway, around the garden with low walls, through the tunnel, up the path going up the hill, over the bridge, down the steps, and across the finish line. The Doberman is pretty fast, so he shouldn't be too far away from the supermarket if you beat him. Once you have taken control of him, go into the supermarket. The Doberman will bark twice, then growl, and the lady will give him the bone to make him go away. He will take the bone to Jake, and then you can eat it.

He isn't exactly the cutest of dogs, and if you have 15 bones (the same as him) or less, Jake will be too scared to go near him! He'll chase you if you happen to come across his owner, The Dog Catcher, but in this level he might help you sort out that mean shop lady. Provided you have the bone power, that is. But when you get further in the game, he'll have 50, 70 and even 90 bones! That Dog Catcher is spoiling him!

Find the eight orange scents, which are around the side of the road near the poodle parlour, through the alleyway and in the gardens. Once you've got them all, beat the Doberman in the Tug-O-War match and a bone will appear in the dog bowl. 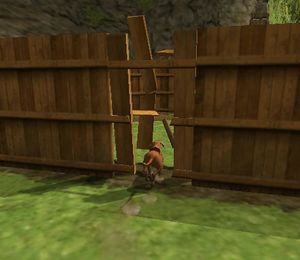 You can knock down loose boards in the fence by running into them.

You might have noticed a boy and a girl who are standing on the pavement. If you talk to them, they say they want you to get some eggs for them to have some fun with the butcher. Take the basket and go through the alleyway. There are some loose planks on the fence, so run at them really fast and you will knock them down. Once through the fence you will find a chicken and a bin. Put down the basket and run at the bin. Once you've knocked it over, eat the bone inside. Then bark at the chicken. Most of the time it will lay an egg after jumping up in the air. Pick the egg up and drop it in the basket. Make sure you press

quickly so Jake doesn't throw the egg, or it will break. Collect six eggs in the basket and take the basket to the kids. They will take the eggs and throw them at the butcher (and hit him in the gentleman's area). Wait by the door of the butcher shop when the butcher walks away from it, and turn the camera so you can see where the butcher is. When he gets quite close to the kids, run inside, grab the bone, and get back out again. If you were quick, you might get out in time so he doesn't call The Dog Catcher.

Run from The Dog Catcher[edit] 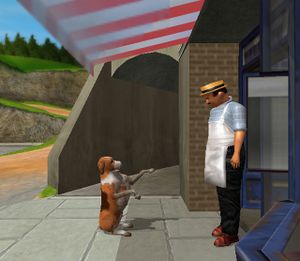 If you get caught in the butcher's shop, eat the meat or soda in the supermarket, or go through the tunnel behind the Doberman, you'll have to run away from The Dog Catcher's dog. A tutorial will come up telling you what you have to do (which is run until the Doberman gets tired) and when it disappears you need to run. There are lots of ways of escaping the Doberman in this level. You can run along the road leading to the Village Houses, you can go down the tunnel next to the butchers shop and jump into the garden with low walls (the Doberman cannot jump, so he can't get in), or you can run up the stairs beside the supermarket and climb the fire escape and the Doberman won't follow you. Your other option is to just run for it up the path leading up the hill. If you get caught by the Doberman, a tutorial will come up telling you that the Doberman took one of your bones (Jake gave it to him to set him free) and that he hid it somewhere. It will be buried in the flowerbed next to the station. After that, go up the stairs beside the supermarket and go into the dog kennel to save the game.

Go behind the Doberman again, and The Dog Catcher will be reading the newspaper. Jake will sneak past him and get onto the train. After the train has left, you will see a cutscene with Wayne and Dwayne, and then you will arrive at the Café