After going into the factory through what looks like a hole in the wall, jump onto a pile of boxes in the corner of the room, and there is a button. Jake will say, "What's that? 'The Big Machine'? Something tells me Miss Peaches isn't making ordinary cat food." Press the button, and the door will open to another room. Go inside and you will see all the machinery used to make cat food... and then you will see that Daisy's on the conveyor belt! The dogs go on to be turned into cat food!

Turn off the big machine![edit]

Jake needs to turn off the big machine as fast as possible... but how? You'll only have a short amount of time to do this, so hurry! Go along the balcony and you will find a ramp. Go down it, and you will find a button. Press it, and the first part of the cat food machine will turn off. 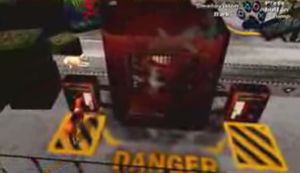 Press these two buttons to turn off the grinders.

After turning off the first part of the machine, go back up the ramp again, and continue along the balcony. Run as fast as possible, because otherwise Daisy will be turned into cat food and you'll have to start again. You will find another ramp not far away from the first one. Go down it, and there are two buttons. The first one is in plain view, but the second one can be missed because it's just to the left of the first one. The second part of the machine (the grinders) will turn off now.

Go back up the ramp, and keep going along the balcony. There is another ramp around the corner, and when you go down it remember to grab the lever and pull it back to turn off the first masher. Now go up the ramp that's next to you, opposite the one you went down, and you will pass a round green area. You don't need to do anything here, so keep on going down yet another ramp. You'll find the lever to turn off the second masher, so grab it and pull it back to turn it off.

Now you're not under so much pressure because Daisy's got a long way to go before she comes to the next part of the machine. You'll see an arrow on the floor pointing to a pile of crates, so jump up them and onto the balcony on the other side. Go along, and you'll find a button. It's in the little section sticking out of the balcony. Press it, and the first blade-like object will turn off. 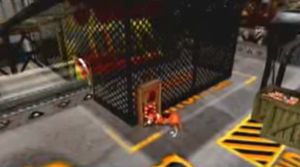 This button is easy to miss!

Now you need to run for a bit along the balcony, and eventually you will come to the end of the it where it's square-shaped. In the corner there is a pile of wrenches, and next to the balcony is the last part of the machine. Jake will say, "Hey, those things could come in handy, Jake to the rescue!" Pick up a wrench and toss it off the balcony and into the machine. Throw two others in and you have rescued Daisy!

Congratulations, you have completed Dog's Life, and you get to watch the scene at the end.

Daisy is much more interested in Jake after you've rescued her.

Daisy will hop up onto the balcony and she and Jake will stand facing each other with hearts above their heads... but then the music comes to a halt as Miss Peaches appears at a door above them, then jumps down to the balcony. "You thought you could outwit me, you disgusting creatures, but you will be transformed into food for my precious kitty-cats. Get your doggy asses into the big machine!" she shouts, pointing a gun at them. Jake says, "Speaking of food, I had beans and cabbages for supper, take this cat lady!" and he does a trump (breaks wind).

Even Daisy has to back away. Miss Peaches can't stand the smell, so she walks backwards and falls off the balcony onto the conveyor belt. She goes into the big machine, and a computerised voice says, "Canning, Miss Peaches Cat Food," and she comes out in a gigantic cat-food tin with her legs sticking out. "I'll get you, you horrible hounds. I'll slice you, I'll dice you, I'll mash you, even if it's the last thing you see me- me..." she cries, as she goes back into the machine. The computer voice says "Miss Peaches, slicing, dicing, mashing, Miss Peaches is... cat food."

After all that excitement, the Scrapbook closes and Jake says "Well, that's it I guess, a story of a Dog's Life," then he continues to tell you what happened to Gramps (who wrote a book about his life), the guitar player (who finally made it big), and Wayne and Dwayne (who, as punishment for dog-napping, opened a Hypo Allergenic Dog Grooming Parlour). "See you next time."