button. Before you start playing, you can go to the options menu by pressing

There are four different ways to get to the options menu:

In the options menu, you can toggle the sound, speech and music on or off, and decide whether to have the paw print Mini-Hint display come on when you go near something you can interact with. You can also choose the language for the game, or quit the game if you want to load or start a new one. Quitting the game is the same as resetting the console, and you will lose any unsaved data. 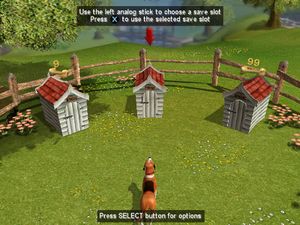 A view of the kennel enclosure.

The first time you play the game, you can enter any of the three kennels to start a new game. Previously saved games are represented by a kennel with a bone floating on top, which includes a number indicating the amount of bones collected in that game. Choose a kennel, and press

to start a new game, or if there is already a saved game there, you can continue on that game or press

to start a new one.

Bones must be collected to advance through the game and they can be obtained by digging them up, by beating other dogs in a variety of challenges, by completing tasks given by human characters, and by collecting special smells. By pressing

during gameplay (out of Smellovision) a bone counter will appear above Jake's head, showing you the current bone status. You can also do this while in control of the local dog, but chances are you will already have found out how many bones they have, since you will have beaten them in a challenge.

The game is divided into three areas: Clarksville, a rural town; Lake Minniwahwah, a ski resort; and Boom City. These are then divided into smaller areas such as districts or farms. In every area there are humans that are willing to give you missions in exchange for bones. Bones can also be found buried underground, hiding under objects, or inside places. 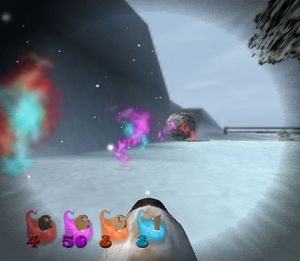 What you see when in Smellovision mode.

Certain smells picked up through the game's "Smellovision" will activate challenges against a local dog. In each small section of the game there are four challenges, two of which are to find eight smells of the same colour and to compete against a local dog. These competitions include races, obedience trials, Tug-O-War games and a territorial game where the player must run around urinating in marked areas to obtain territory. Once a dog is defeated, the player is able to take control of that dog and use its special abilities to find other bones. There are also dangers in certain areas, such as Dog Catchers. The player must also keep the dog healthy by feeding it, allowing it to defecate and coax people into giving you snacks by growling and barking or performing tricks unlocked by doing the obedience trials. Jake is able to do a range of tricks including begging, sitting, lying down, urinating and defecating.

There are also salons in some levels where Jake can get his coat cleaned and brushed. He also gains a shiny new collar with a silver "J" at the front. Each time you load the game, however, his collar returns to the red one with a yellow "J" on it. 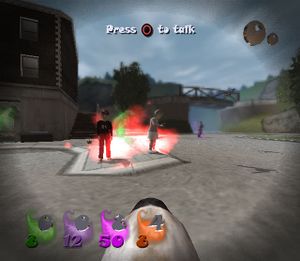 In Smellovision you can see the green scents, which can be collected.

This is a feature unique to Dog's Life. Smellovision (SOV for short) lets you see the world through Jake's eyes, and also lets you see and collect scents. Scents show up as gassy clouds, and once they are collected, Jake makes a sniffing sound, and occasionally he says something about how it smells. When in control of other dogs, you cannot use Smellovision, and the same goes during Top Dog challenges. In Smellovision, you can locate exactly where bones are, because a pillar of light shines from each one. You can also see where people are who have bones, because anywhere where there is a bone, there is a pillar of light.

Local dogs will have a pillar of light coming from them until you have beaten them at both challenges, and then they will leave a trail of blue smoke (apart from the Alsatian in Boom City Station, because the sleeping bandit covered him in perfume). Things that you need to find for people (like batteries, wigs, etc.) will have a small cloud of orange smoke coming from them, and people who don't have bones will leave a trail of purple smoke. Sheep and pigeons leave a trail of green smoke, and if Jake does a "poop", then dark blue smoke will come from it.

When Jake is okay, he will run along like at the very beginning of the game, but as his health starts to decrease, he will gradually start to move slower, and look tired. When he gets really tired, he will walk, and have his head down. In this game, Jake can never "run out" of health. Walking is as bad as he gets. Jake has constant full health when being chased by the Dog Catcher or, surprisingly, while the snowman-building girl at the Ski Slope is talking. There are ways to gain health back, but there are also a number of ways that Jake can lose health.

Health is gained by:

Health is lost by: 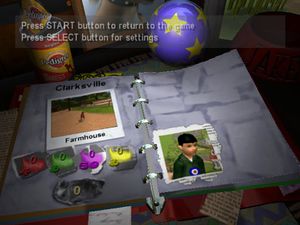 Use the Scrapbook to monitor your progress.

The Scrapbook acts as a pause menu, because you go into it when you press

. It also shows you how many bones and scents you have collected in the level, as well as characters and important objects you have encountered. If you think you missed a bone somewhere you can use

to flick through the pages of the book. Also, if you go to the last page in the Scrapbook you can view your unlocked Doggy Do moves and see how to perform them. Either press

to go back to playing the game.