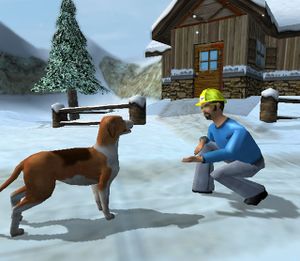 See if you can get a treat from one of the passers by.

When you get to this level, switch to SOV and walk along the road because on it and the pavement there are plenty of purple scents. You'll also probably see a boy wondering around with a remote control in his hands. If you talk to him, he will tell you that his helicopter landed on top of the building, but he thinks it's broken. It's your job to get it back for him. You can go up the ramp beside the road to the balcony and then up another ramp onto the roof, but with Jake you'll just slide off, fall down and lose health.

Instead go around behind the shops and gather eight yellow scents which are scattered about. Then you'll be doing a peeing challenge with the local Husky. In this challenge, you might notice that the area you have to cover is shaped like a dog. Anyway, to win you have to cover his leg, tail and part of his body. Once you have control of the Husky, go back up the ramps and onto the road. Voilà, you don't slide anymore. Walk along the lower part of the roof, and you'll find another balcony. On it you'll find what you're looking for, an RC helicopter. Pick it up and the Husky will throw it in the air. It wasn't broken after all. You'll appear next to the boy, and he'll give you a bone.

Like the Weimaraner, he has 25 bones and he can walk on slippery surfaces. So beat him in a challenge, and you might be able to get the helicopter down from the building. Jake needs help with this, because the roof is so slippy that if he walks on it he will fall down to the ground... Ouch.

Pigeons on the wrong perch[edit]

You've seen the building next to that one, probably, and there's a ramp at the back that leads up to a door. While going up the ramp you'll constantly hear, "Lake Minniwahwah calling relay stations, come in please" being repeated. To find out who's talking, go through the door and you'll see a man. He has a steak on the desk next to him, and he will tell you that the radio lines are down. Then he'll give you a clue about how to help him. He'll say "Hmmm, if the cable car is running I could go up and check the radio antenna."

Go back out and down the ramp. Go up the other ramp leading to the shops (the one you went up to get the helicopter) and you'll see a bird table. Next to it are lots of pigeons and a bird feeder. Pick up the bird feeder, go back down to the road, and go into the cable car which is at a building at the side of the road. You'll usually see the husky walking around there. Once you've gone in the cable car, it will take you up to the mountain tops area. Jake will come out when you arrive, and for now lets ignore the cable car operator banging on the door to the control room.

Go down the ramp, and you'll find a signpost. Follow the sign with the antenna on it, and it will take you up what is basically a mountain to find the antenna. If you go close you'll see that there are pigeons all over it, so drop the bird feeder and they'll come down. Run back down the mountain to where you started and get in the cable car. When you arrive at the High Street area again, go back to the man and he'll start wondering what happened to make the radio work again. Then he'll say "That certainly was a fine steak dinner, but what to do with the bone? Here you! Bury this or something." When he gives it to, you can eat the bone.

If you go into the room near the cable car, you'll see that it's full of boxes and in the middle of the room there's a bone. Eat it, then go back to the road and up the ramp in front of the shops. Run at the bin to knock it over and eat the bone inside. 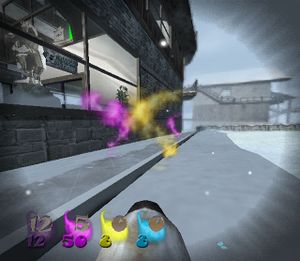 Look for scents behind the buildings.

Now, to get a bone in the dog bowl, go back down the ramp and across the road. If you go into SOV and look around, you'll find a violet scent. Get it, and some more will appear nearby in the snow. There's one above the folding sign, two in the middle of the road by the lampposts, three or four by the house, and the rest are on the snow between it and the other building along the road. If you're missing any, you can press

the same as when looking for purple scents, because it works with all scents. When you've gotten the twelfth one, a bone will appear in the dog bowl, so go and eat it.

If you go behind all the shops, you can find some light blue scents - eight of them in fact. Some of them are behind the other buildings as well. Once you've got all eight of them, you're in a digging challenge with the Husky. You need to dig eight holes before him, and you'll need to jump over a low wall as well if you don't want to waste time going around it. If you win, a bone will appear in the dog bowl.

The purple scents are the last bone to get, and they are mainly around the road. There are some up the ramps leading to where the helicopter was, two in the shop on the balcony, some around the back of the shops, and some near where the first violet scent was. When you've gotten them all, eat the bones that are now in the dog bowl and go into the kennel to save the game.

Now go into the cable car, and once again you'll be at the Mountain Tops.