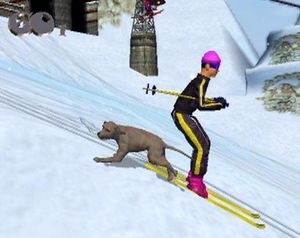 Give the skiers a fright and watch the fun commence!

Go into SOV mode when you get to this level, because there are thirteen purple scents around the cabin and the wall behind the car park. Then go onto the snow and you'll see two boys having a snowball fight. When you go near them, they'll first say there's a kid at the top of the slope looking for a dog, and then the one in the blue jumper (sweater) will challenge you to hit him with three snowballs. When he throws a snowball at you, you can pick it up. If the other boy throws one at you, it'll just disappear. Pick up the snowball and face either of the boys. It doesn't matter which one you throw the snowball at. If you hit him, you'll hear a sound telling you. Do this three times, and the boy in the blue jacket will drop a bone. Eat it, then go into SOV to find the bone that's buried nearby. Dig it up, and eat that one too.

The hat that got away[edit] 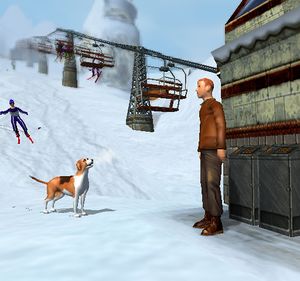 Find this man's hat on the summit.

Go to the building at the bottom of the chair lift and you'll see a man working the controls. Talk to him (because he has a bone) and there will be a gust of wind and his hat will blow away (He'll tell you that it's the latest of three times he's lost his hat in the week). You'll see it get caught on one of the chairs and then blow away to the top of a small mountain. To get it back find eight orange scents by what looks something like a frozen pond down where the boys were having a snowball fight. After finding them, you will be up by the cabin at the top of the slope doing a Tug-O-War with the local Weimaraner.

Beat the dog, and when you have control of him, go through one of the arches leading to the slope. Go to the highest point of the slope next to the mountain. You'll see a path which you can only get onto with the local dog because it's too high for Jake to jump. Jump onto the path as the local dog and go along it. You'll go around the first mountain, jump over two gaps and arrive on the other mountain. Go along the path around the second mountain and you'll see a bit sticking out. After finding the hat there, pick it up and the local dog will automatically take it back to the man, literally throwing it at him. When he gets his hat back, the man will give you a bone.

As probably the best at jumping in the whole of Lake Minniwahwah, it's no surprise that he can get onto a path that Jake can't. If you beat him in a race or Tug-O-War, and you have more than his 25 bones, he can help you get the hat for the man controlling the chair lift. A strange thing about him is that he seems to be able to walk normally on that ice slide. 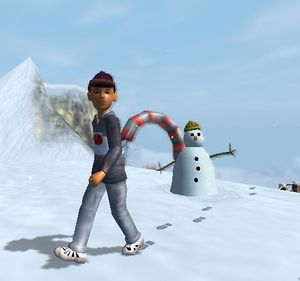 One of the boys who is in the snowman building contest, with whom you could also have the snowball fight.

If you go back up to the top of the slope where you did the Tug-O-War, you'll see some more boys having a snowball fight and a girl with part of a snowman beside her. If you talk to her, she'll tell you that she and the boys are having a snowman building contest and she wants you to help her beat them. First, she will make a small snowball. You need to roll it along the ground to make it bigger until it's almost as high up as Jake's legs and won't get any bigger. Do this by pressing

to roll the snowball when it says "pick up".

When you've made the snowball big enough, roll it back to the girl and she will put the head on the snowman. But your work isn't over yet, because the snowman has no features, so obviously has no chance yet of winning the competition. Next, she'll ask you to find something for the eyes. If you go into the hut in the corner, you'll find a pile of coal and a bone. Eat the bone, then pick up the lump of coal and take it to the girl. She will ask you to get some more coal, so go back into the hut and get another four pieces (remember you can only carry one at a time so you'll have to take multiple trips). After that she'll ask you to get some twigs or branches for the arms. You can find some sticks under the trees near the hut. Try to resist playing fetch and bring them back one at a time to the girl.

There are four red scents on and around the snow bridge near the hut. Get them all to do the Doggy Do challenge.

It's time to go on the slide! There's a trail of green scents going down the ice slide nearest the boys' snowman. On the slide itself there are six green scents. Try and collect them all, or if you miss any, go back to the top of the slide and try again. If you haven't already gotten the other two scents while looking for orange ones, the last two green scents are in the area with the frozen pond, next to the slide. Once you've played for a while you can get to that area from the ice slide. Get the green scents if you didn't already, and then you're in a race against the Weimaraner. You start next to the hut near where the girl has built her snowman. Go down to the mini café, around and past the frozen pond, and then the finish line is at the bottom of the slope. If you won, a bone will appear in the dog bowl.

Now you need to look for purple scents to get the last bone in the level. They are;

When you've found all fifty, a bone will appear in the dog bowl. Eat the bones, and go into the kennel to save the game.

Now go along the road that doesn't go through the tunnel, the one that looks longer. Keep going along it, and eventually you'll come to the High Street