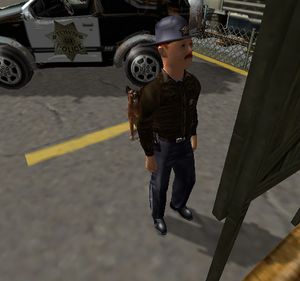 Help the Sheriff and catch the Sleeping Bandit.

When you get to this level and Jake has hopped off the train, go out of the station and just next to it you will see a man staring at a wanted poster. He will tell you that he is the Sheriff, and he will say, "Hows about you and I track down the Sleeping Bandit?" He will then tell you that his Alsatian (the local dog) lost his sense of smell when the Sleeping Bandit covered him in perfume. When you have control of Jake again, go slightly down the road and go into the area with high chain-link fences around it. You will see a wooden thing sticking out, so jump onto it. Next to the wall of the building, you will see three crates, forming a small staircase. Jump onto the first one, and you will find a button on the wall. Press it and you'll see a garage door come down, except it's high up in the air. Once you can see where you're going (as in the camera's gone back to Jake), go along beside the building and go up a plank that acts like a ramp onto a pile of crates. Jump to the highest one, then try and jump onto the roof. 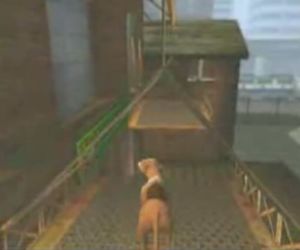 Jump across the swinging platforms.

Go along the roof and go up the other plank you find. Now you'll come to some swinging platforms. Jump onto the first one when it comes near you, and then try to jump onto the second one without jumping back down to the ground. Jump onto the garage door platform and make sure you don't go too far or you'll fall off the other side. Go through the door and you'll find a room with lots of crates, which can be moved around. Line them up so they are in a line in the centre of the room (going from the windows to the platform at the end of the room) and jump onto the first one, the second, and the third. Then jump onto the platform at the other end and go through the tunnel. There are three tunnels, and you need to go through the middle one, so that's why you needed to line the crates up in the middle of the room.

Continue through the tunnel and you'll come to a balcony. Go down, grab a bone on the other side of the wall, and the camera will move towards the window, showing you that the Sleeping Bandit is in the building with the balcony. You need to creep into the building (to creep, just move the

analogue controller slightly and Jake will go slower) and go under the Sleeping Bandit. The paw print Mini-Hint display will flash (if it's turned on) and tell you that you can pick something up. Press

and Jake will grab the Sleeping Bandit's mask. Now go back through the level, back along the balcony, through the tunnel, out the garage door platform and back to the Sheriff, and he will ask you where you found it.

Note
It is possible to grab the handle (using the Alsation) from outside the building, meaning you could just open the door and then use Jake to get the mask, but it's difficult to get the local dog in the right place.

Your work for this bone isn't over yet. Jake will take the Sheriff to the building, but the door is locked so it won't open. Sounds like a job for detective dog. Go into SOV and hunt around the fenced area and you will find eight yellow scents. Win the peeing challenge against the Alsatian and you can take control of him. Go into the room with the Sleeping Bandit by going the same way you did with Jake. Creep down all the stairs and when you get to the door, grab hold of a lever and go backwards to open the door. The Sheriff will go in and you can watch the Sleeping Bandit get arrested. Then the Sheriff will come over and give you a bone. He will ask you to sniff around and see if you can find the Sleeping Bandit's accomplice. Then he and his dog will drive away in their police car. You can eat the bone now, and for some reason the Alsatian might still be wandering around the level. 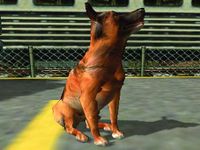 He's the Sheriff's dog, so you definitely don't want to mess with him. He had a bad experience with the sleeping bandit when he was covered in perfume, and now he's lost his sense of smell. But he can still help you catch the Sleeping Bandit, because he is strong enough to open the bolt on a door. Just have more than his 55 bones at the ready and he'll help you, but if you have less than that it will be hard to control him.

If you switch to SOV and go towards the building with the fire escape stairs at the side, you'll find eight pink scents leading to the stairs. Get them all and you'll be doing a pursuit challenge with the local dog. That's why he was still wandering about. He will run into an alleyway between the building and the poodle parlour, which leads to a round grassy area, but it's fairly easy to catch him. Once you have caught him, a bone will appear in the dog bowl which isn't too far away in the corner of the grassy area.

A bone and blue scents[edit]

If you go up the fire escape stairs on the side of the building, you will come to a door. Inside the room you will find a hallway, and if you turn to the left and go down the room, you'll come to a bedroom. On the bed is a bone to eat. Go back down the hallway to the room opposite the fire escape. If you switch to SOV, you will find a blue scent. The next one will be in the hallway, and the rest are in a trail leading down the fire escape, through the alleyway to the grassy area, around the tree and towards the dog kennel. When you've gotten the twelfth one, a bone will appear in the dog bowl, and you only have to walk a few feet to be able to eat it. After that, switch back to SOV, follow the pillar of light, and you can dig up a bone.

As usual, the last bone in the level is the one earned for collecting purple scents. They are dotted around the grassy area. One is near where the first blue scent was, there might be a few in the bedroom, there are loads scattered about the street and the station, quite a few around all the crates next to the station, and some scattered around the outside of the building where the yellow scents are. After looking around all those areas, you may have 47 purple scents and need the last three scents. You need to jump up all the piles of crates in turn that are next to the station, and you'll be able to get onto a roof. Go down to each end and you'll find the three scents. A bone will appear in the dog bowl, so eat it and go into the kennel to save the game.

Now, go along the road away from the station, and eventually you'll come to the Park.