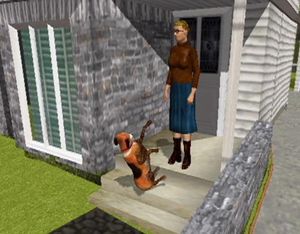 You can try begging, but the lady will only let Snooky into the house.

Go into SOV when you get to this level, and go slightly along the road going to the Clarksville Centre, and you will find a scent. Don't go any further though, or you will end up in the Centre. Turn around, and get the other scents in the road. While next to the playground, you may notice the boy in the red top on the roundabout. If you talk to him, he will tell you that his friend (Mary-Jane) has been grounded by her mum. He asks you to get a note to her to cheer her up. Pick up the note at the end of the tunnel, and go along the road. The house you need to get the note into is the one with the lady standing in front of the door. If you go near her, she will say, "Get away from here, you nasty dog!" If you go near her for a second time, she will say the same thing, but a tutorial will come up saying "Looks like she's not going to let Jake in the house - but maybe she'd let another dog in?"

Put the note down somewhere on the other side of the garden, and go around the left side of the house at the end of the street. Here, you will find eight green scents and two purple scents. Get the purple scents, and then the eight green scents, two of which are behind the house. Now you can race Snooky, the puppy (possibly a Tibetan Spaniel). The race starts in the road, then goes through two gardens on the right side of the road, then crosses the road, goes through a back garden, then a front garden, then the back garden with the dog kennel in it, and finally across the finish line. When you have switched to Snooky, go back to the garden with the lady by the door, pick up the note you dropped, and walk over to the lady. She will say a load of gibberish, and then let Snooky in. You cannot control Snooky in the house, however, so you'll just have to watch. Snooky will take the note to the girl, then the girl will talk for a bit, tell Snooky she's a clever dog, and drop a bone. Snooky will take the bone outside to Jake, and then you can eat it.

She's a puppy, so it's no wonder that when you take control of her, Jake says "I feel years younger, how cool is this!" You'll be needing her help, because Mary-Jane has been grounded, and Snooky is the only one allowed inside the house to bring her a note! Her size also could help you if you were interested in that smelling thing inside the greenhouse. Easily beat her in a race or digging challenge, because by now you should have more than 6 bones!

Go into the garden of the house with the greenhouse in it, and collect the eight blue scents, along with the many purple scents in this garden. After starting the digging challenge, dig six holes faster than Snooky and a bone will appear in the dog bowl. Before Snooky has gone out of the garden, take control of her again and go through the smashed window in the greenhouse door. There's a bone inside! Pick it up and Snooky will take it to the garden with the lady at the door where Jake will be waiting. Eat that bone, and get the bone in the dog bowl if you want. 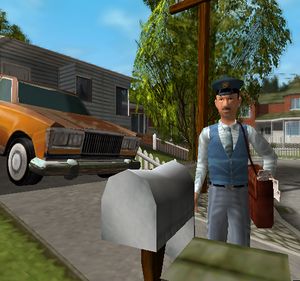 Help the postman get by the Terrier.

While collecting green scents, you may have noticed the postman who is standing in front of the house at the end of the street. If you talk to him, he will say that he cannot deliver the mail because of the Jack Russel Terrier, who is running around in the garden. The Jack Russel has three bones, so as long as you have more bones than him, you will be able to control him. Well, not the kind of controlling like you do with the local dogs. If you bark (

), he will follow you unless you go out of the garden or around the side of the house, and if you growl (hold

Bark to tell him to follow you, and then press the button next to the garage door. After the door has opened, run inside and growl to tell the Jack Russel to stay. Then run back outside and close the garage door by pressing the button again. When the door has closed, the postman will drop a bone. He will then discover a leaflet to win a free trip to Lake Minniwahwah. That's where the dog-nappers were headed with Daisy! If you want to do something funny, just before the garage door closes trapping the Jack Russel inside, press the button again. Then, while the postman is talking to you, the Jack Russel will run out and start running around all over the place. Then it will seem strange why the postman is giving you a bone. 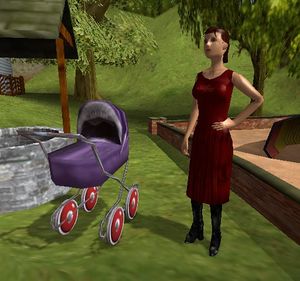 Find the baby's doll in the playground.

You might have seen the lady who is standing next to the playground. She has a pram (baby carriage) with an invisible crying baby in it. If you talk to her, she will tell you that the baby dropped her doll somewhere. You could follow the footprint trail, but otherwise keep reading. First, you need to go into the playground and then go through the tunnel. When you are about halfway through and the camera has gone all weird so you can see Jake properly, you will see the doll lying on the floor. If you take the doll back, the lady will ask you to toss the doll up to the baby. Once you have done that, the lady will tell you that her dog used to do that, before she disappeared. This is all getting very confusing for Jake. Then the lady will drop a bone. It seems like it's not just Daisy who's gone missing...

Use Smellovision to find buried bones.

If you go around the side of the house at the end of the street, and go into SOV, you will see that a bone is buried in the ground. Dig it up, and eat it. The last bone in the level is in a bin in the back garden of the house next to the one with the dog kennel. Knock the bin over and eat the bone. Then eat any bones left in the dog bowl and go into the kennel to save the game.

Go back down to the road and go towards the roads leaving to other levels. You need to go along the road that looks more like a proper road, because the dust road leads back to the Farmhouse. Keep going, and eventually you will arrive at the Clarksville Centre