When you first arrive at this level, it is almost certain that the first person you see will be a lumberjack (named Billy Bob) who will go on and on about the fact that he lost his axe. It is more than obvious that to get the bone from him, you need to get his axe back. 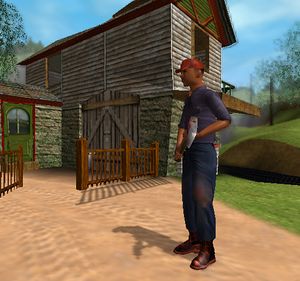 Retrieve the axe for the lumberjack.

Go around the yard, and up the small hill to find a slope. Switch into SOV mode because there are some purple scents along the way. Once you've come to the top of the slope, you need to go under the stone arch, and follow the path along. Remember to pick up all the scents. You will eventually come to four wooden steps. Jump up them, and you will find the path again, but much higher. Follow it around a few corners, and you will come to a plank of wood lying between the path you're on and the ledge where the axe is. Go down the plank, and find the axe next to the hammock.

Go up these steps on your way to the axe.

To get back to the lumberjack, jump off the side of the ledge opposite the plank, and you will find the stone arch again. Go back down the slope, and down the hill. Go back past the yard, and the lumberjack will say thanks and give you a bone. Now he can finish making those cages for The Dog Catcher. (That's really what he says.) After that, he will continuously say 'I love my axe' whenever you go near him, and it gets annoying after a while.

If you go out to the small island in the middle of the lake, you may have noticed there are two bones; one buried and the other in plain view. But, if you go near the bone above ground, a swan will fly out and grab it. So first dig up the bone on the other side of the tree, eat it, and then go into SOV. Collect eight pink scents, all dotted around the tiny island, and you can do a pursuit challenge with the local Dalmatian. A tutorial appears telling you what to do, and then you can run after the Dalmatian. Once you have caught and taken control of him, swim back out to the island, look for the swan, and jump out into the water. If you missed, the Dalmatian is a fast swimmer so it won't be too hard to catch the swan. Once you have gotten close enough to the swan, the Dalmatian will automatically bring the bone back to the island. 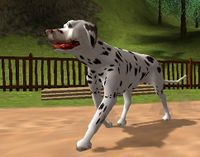 He's very spotty, and a very fast swimmer, so see if you can "spot" him in the pursuit challenge to win and get the bone away from that pesky swan! He has 4 bones, that's more than Lopez, but as long as you've been paying attention at the Farmhouse, you should have at least 9!

Eat the bone, and then look for eight orange scents. They are also on the small island. Once you've got them, you can do the Tug-O-War challenge. A tutorial will come up telling you how to play the game, and then press

as fast as you can to pull. When you have beaten the Dalmatian, a bone will appear in the dog bowl.

If you go behind the waterfall, you will find a secret cave. There is a path in here, so follow it upward. Downward just leads to a pool of water. While following the path along the side of the cave, you will need to go over two jumps. Just after the second one, go into SOV mode, because there is a purple scent there. Then carry on along the path, and you will come to the end, where the path sticks out a bit more. You need to jump to the ledge on the other side, where there is another purple scent. There is also a bone. Eat the bone, and go back down the path to get back out to the main level.

The four red scents are all around the actual watermill. Two are in the yard, one is near the lumberjack, and the last one is behind a tree. Once you've gotten all of them, Jake and the Dalmatian will appear in the yard, and you will have started the Doggy Do game.

After you have learned Beg 2, you can eat the bones in the dog bowl if you haven't already. 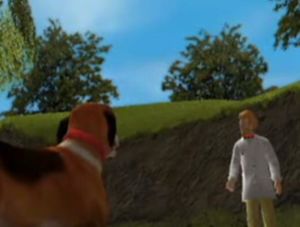 Find the rocket pieces so the scientist can relaunch his rocket.

On the other side of the lake, you will find a path that leads up a hill. Follow it, and you will find a scientist (he says his name is "Ludwig Von Shnitselmarker") and a tiny rocket. If you talk to him, he will say that he is going to be the first person to send a home-made rocket to Pluto. Then, he will turn on the rocket, and run screaming behind what is basically a piece of fence. The rocket will take off into the air, but then will explode into four pieces, which all fall to the ground. The man will ask you to get all the pieces back for him so he can repair and relaunch the rocket, and change the three volt flux capacitor to a five volt one.

SOV cannot be used here, because there is no footprint trail leading to the rocket pieces. When you have control of Jake again, go back down the path. You will find the first piece of the rocket there. Pick it up and take it back to the man, it's not hard to miss. The tip of the rocket is on the small island, so swim out there and get it. Then, bring it back again. The next piece is on the hill you went up looking for the axe. Bring that back, and then you just need to find the bottom part of the rocket. It takes a while to find if you haven't found it before. You need to go back over to the watermill side of the lake, then grab the bale of hay, and pull it towards the dog kennel. Then let go and jump on top of it. After that, jump from the bale of hay to the balcony, and then through the window. The piece of the rocket will be in the fireplace (don't worry, the fire is out), so pick it up and jump back out the window. Jump down from the balcony, and take it to the man.

When you have given it back, he will launch the rocket again, and will give you a bone. Then Jake will say, "One crummy bone? What gives?" and he will growl. The man will say he was only joking, and give you another bone. Jake will reply; "Boy, some people will promise you the moon...or Pluto." Now all you have to do is eat the bones.