Every province has a set of scales that measures how the land is influenced by divine might. In the beginning of the game all scales in all countries are randomly set. When your dominion spreads the scales of your newly conquered provinces will start to change. With stronger dominion the process goes faster. Eventually the scales in a province of your dominion will be exactly the same as the dominion of your pretender god. 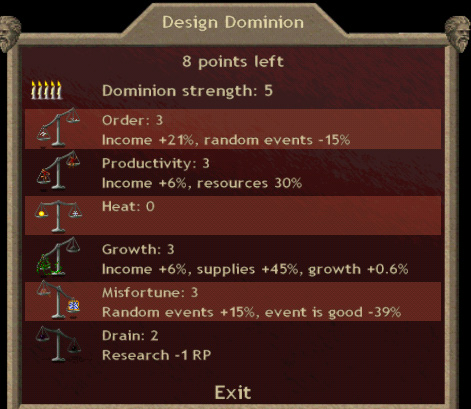 When designing your Pretender God you will be asked to select your Scales of Dominion. These scales set how your divine influence will affect the world. For example, if you pick Cold scales the lands under your Dominion will grow colder and if you pick Turmoil your people will be less productive. Each scale can be set a maximum of three clicks in either direction.

The different Scales of Dominion are:

A land of order is a prosperous and peaceful land without much happening. Most people are friendly and tend to share the same views. Strangers are quickly incorporated in the society to reduce inconvenience. Beggars keep out of the streets and receive institutional alms. A land of order can be a very boring place. A land of turmoil is chaotic and uncivilized and filled with feuds and sudden murders. Even the weather is harsher and unfriendly. A land of turmoil can be an interesting but dangerous place to visit.

A land of productivity is characterized by industrious people working all days and trying to do their best at all things in life. A plenitude of goods are made and sold in the numerous markets littering the landscape. The peasants experiment with alternative crops and the smiths tries to increase productivity by inventing bigger and better bellows. A land of productivity is a good place to visit. A land of sloth on the other hand is a lazy and boring place. Donkeys block the streets and no one cares to remove them. The fires of the forges are cold and the city guards sleep on their posts. Even the dogs ignore the eventual visitor. Few visitors ever leave a land of sloth. Those who do rarely come back.

(a patch has changed the resource differentiation to 15% for each click, hence the inaccuracy of the image at the top)

A land of growth is a land of milk and honey. Food is plentiful. The deep forests are rich in game and the fields are fertile. Several harvests a year is not uncommon in the land of growth. The forests grow and it is possible to see the trees sprouting leafs. A land of growth is a wonderful place but the plenitude of insects and vermin can be annoying. A land of death is a desolate place. A few pale gray trees stand where forests previously covered the landscape. No birds sing and the crops are meager. Many a calf is stillborn and disease harries the populace. Deserts, or tundras in case of cold lands, grow and the poor people despair. No sane man will stay in a land of death for long.

This table doesn't take into account natural nor conjured disasters nor the effects of pillaging and patrolling.

Hot lands tend to be dry and devoid of rains. However some hot land are covered in thick forests and swamps. Few hot lands are suited for farming. Cold lands tend to be desolate and snow covered tundras. However some cold lands are covered in thick pine forests or deep swamps. A scale of heat or cold is generally bad. Therefore you gain design points by shifting the scale in any direction. Note that some nations prefer somewhat hotter or colder lands than others. If you play such a nation, make sure to tip the scales so that you get no penalties. You still get free design points for each scale away from "normal" temperature.

A land of fortune is a good place to visit. Luck is thick in the air. If you trip and fall you might find a coin and when you open a door you might place it between yourself and the stone thrown by some nasty kid. Good events are common and no one seems to have any bad luck. A land of misfortune is not a good place to visit. Vases fall on your head through open windows and nails find their way through your soles. The fish let go of the bait and wheels break in the middle of the street. No matter how well a project is planned there will almost always be some trouble or another. Lands of misfortune are best avoided.

A land of magic is filled with mysteries and riddles to be answered. Magic is almost comprehensible and even stimulating. Ancient magic enigmas get solved by lonesome, fatherless peasant boys whose friends find themselves hunted by cowled riders. The moon is often full and the stars shine brighter. Legends seem real and magic rings can be pulled out of the water when you are fishing. Researching in a land of magic is an easy task. A land of drain is a gloomy place. Thinking is difficult and the sun seems bleak. The stars are seldom visible and the song of running water is muffled and dull. No one has heard of mages or heroes or their mighty deeds of old. The very nature seems to be starving. Casting magic or researching spells is difficult at best in a land of drain. Mages avoids these lands.

When picking your scales it is critically important that you keep the following things in mind:

For example, Caelum has Cold preference of Cold +3. This means you can get 120 free design points from taking three picks in Cold and the Caelian units will gain benefits from the Cold dominion. Since Caelum's troops require large amounts of resources and supplies, taking Productivity and Growth can be very beneficial. Taking picks in the Magic scale will help Caelum's inexpensive mages.

This is but an example of scale design and some people take negative scales to free up design points. Underwater nations can take picks in the Cold or Heat scale because the climate scales don't affect sea income. A land of the dead has no need for Growth, Order, Production, or a pleasant climate. However, a nation whose troops use heavy armor might need the Production scale to have enough resources to field armies. Since Growth and Death scales decrease and increase respectively the chance of getting afflictions on beings with old age, you should consider the age of your mages when you choose Growth or Death. Understanding your own style of play and the nations' strengths, weaknesses, and needs is important when picking scales.

The Strength of Dominion, symbolized by the candles, is another thing you must set. The Dominion is the strength of your presence. If your Dominion dies you also die, but if you die and you still have Dominion you can be called back. Dominion changes the land by your scales and some nations have special dominions such as later Ermor's death and reanimation dominion. Dominion is also used by some global spells. Strength of Dominion also affects the number of Sacred units you can make as you can make one Sacred unit per Dominion strength in a province. Increasing Dominion strength costs design points.

Dominion Strength of 4 to 6 picks is general considered the norm, but depends on nation and map size/density. Any less will be insufficient and any more is generally reserved for special strategies. Note that each Dominions candle costs 7 design point *more* than the previous, so high dominion strength is costly, especially if starting from a low value (rainbow mages for example)

Dominions Strength of 9 or 10 gives your pretender the Awe ability.