Dominions 3: The Awakening/Nations/Ulm, Enigma of Steel

The Warrior Smiths work as priests, since smithing is sacred to the god of Ulm.

The following pretender god chassis are available for Enigma of Steel:

Of these, the only unique choice available to Enigma of Steel is the Lord of War.

All Enigma of Steel units have the Mountain Survival and Forest Survival traits, as well as at least a 50% cold resistance. The sole exception to this is the Scout leader type, who corresponds with the "generic" scout profile.

More than half of the Enigma of Steel unit types are stealthy, though the sacred Steel Warriors are lamentably not in this club. Warrior Chiefs, Shaman, Antlered Shaman and of course the Scout are stealthy.

Enigma of Steel has only one sacred troop type, the Steel Warriors. Shaman and Antlered Shaman, being priests, are also sacred.

1E2S2D1N2H, which opens up some interesting paths for Early Era Ulm. Prophetizing him gives you access to Divine Bless, which can be useful.

He starts of at a not-so-spry 90 years of age and quickly starts of acquire afflictions, so be sure to use him while you can. 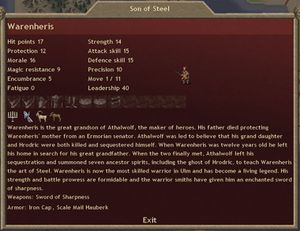 Sort of underwhelming. A run-of-the-mill commander with decent stats that are only slightly above those of your normal Warrior Chief, fairly low leadership (40), and he's not even stealthy (probably due to the smell). He is sacred, free, and he comes with a Sword of Sharpness. 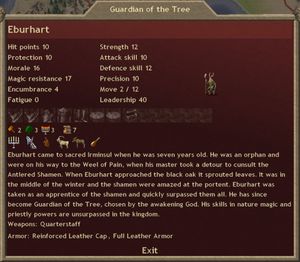 Get yourself a copy of "Anvil of Crom" from the Conan the Barbarian soundtrack. Make sure you've got a good sub-woofer. Crank it up pretty damn loud. When your SO complains, scream back something that sounds like you're speaking with a mouth full of marbles... maybe "Grant me revenge! And if you do not listen, then to HELL with you! " or maybe "It's not a tumor!" or simply "Enough talk!"

After she's walked out of the room muttering something that you cannot hear over the bass drums, create your pretender god. You should name it "Crom," and it really shouldn't be anything less manly than a Lord of War. I mean, you could use a crone as a chassis, but Aharnold would call you a "gurley man"... and so would I.